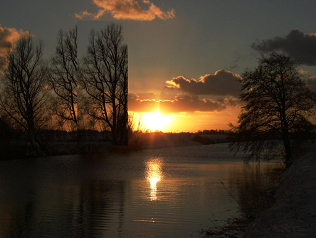 To make Self-Inquiry most effective, assume that I you not know an answer to: "Who am I ?" But you know that you exist; you cannot not know that.  Bur assume that you just really do not know the answer to: "Who am I ?" & really try to find out.  That way you then rely on experiential knowledge rather than an image or an idea. The idea of “existence” is far removed from actual Pure Existence. That it is so far removed, not even close, is generally true of everything of a spiritual nature. The idea of Bliss is not the experience of Bliss, & the experience of Bliss does not resemble any idea about Bliss. Likewise, the idea of Consciousness has nothing to do with Consciousness.

It is false to speak of Realization.  What is there to realize ?  The Real is as it is always.  We are not creating anything new or achieving something which we did not have before.

If we dig a well & create a huge pit, the Space in the pit or well has not been created by us.  We


have just removed the earth which was filling the Space there.  The Space was there then & is also there now.  Similarly we have simply to throw out all the age-long samskaras [innate tendencies] which are inside us.  When all of them have been given up, the Self will shine alone.

“There is no Creation, no Destruction, no Bondage, no longing to be freed from Bondage, no striving for Liberation, nor anyone who has attained Liberation. Know that this to be Ultimate Truth.”
–  the “no creation” school of Gaudapada, Shankara, Ramana, Nome – Ajata Vada
for very succinct summary of the teaching & practice, see:  www.ajatavada.com/
Posted by jstiga at 10:16 AM