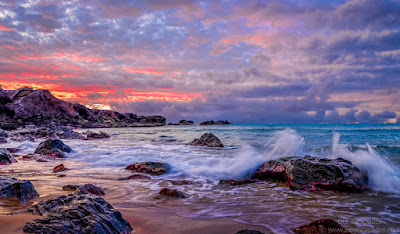 Of the 4 words of the name "Bhagavan Sri Ramana Maharshi", only the word "Ramana" is a personal name, & the other 3 words are titles of various sorts.  "Ramana" is a shortened form of "Venkataramana", a variant of his childhood name "Venkataraman", & is a word that is commonly used as a term of affection.  Whereas in the name "Venkataraman", the letter "a" in the syllable "ra" is a long form of the vowel & is therefore pronounced with a stress, in the name "Ramana" all the 3 "a" ’s are short forms of the vowel, & therefore none of the 3 syllables are pronounced with any stress.  Etymologically, the word ramaṇa comes from the verbal root ram, which means to stop, to set at rest, to make steady or calm, to delight or to make happy, & is a noun that means "joy" or that which gives joy, that which is pleasing, charming or delightful. By
extension it is used as an affectionate term meaning a beloved person, a lover, husband or wife, or the lord or mistress of one’s heart.

The word bhagavān is an honorific & affectionate title meaning the glorious, adorable & divine Lord, & is used generally as a term meaning "God", & more particularly as a title of veneration given to a person who is considered to be an incarnation of God or a human embodiment of the Supreme Reality, such as the Buddha, Sri Adi Sankara, or most commonly Sri Krishna, whose teachings are given in the Bhagavad Gītā & in parts of the Śrīmad Bhāgavatam.

The word śrī is a sacred monosyllable meaning light, luster, radiance or splendor, & is customarily used as an honorific prefix appended to the names of holy people, places, texts or other objects of veneration. As a reverential prefix, it means "sacred", "holy", or "venerable".  But it is also commonly used as a simple title of respect which may be appended to the name of any person in place of the English title "Mister".

The word maharṣi (which is commonly transcribed as "maharshi") means a great ṛṣi (commonly transcribed as "rishi") or "seer".  To the World at large, particularly outside India, Sri Ramana is generally known as "Ramana Maharshi" (probably because to a western Mind the title "Maharshi" placed after his personal name appears to be a surname, which it is not), & since he is so frequently referred to as such, some people even refer to him simply as "the Maharshi".

However those who are close to him seldom use the title "Maharshi" when referring to him.  In Indian history & mythology, the term ṛṣi originally denoted one of the inspired poets or "seers" who "saw" & wrote down the hymns of the Vēdas, or any person who was adept in the performance of Vedic rituals & had thereby attained psychic or supernatural powers, but in later times it was used more generally to denote an ascetic or saint who was considered to have achieved some degree of spiritual attainment.  The term ṛṣi has therefore never specifically meant a person who has "seen" or attained true Self-Knowledge, & nor has the term maharṣi (maha-ṛṣi). The few ṛṣis, such as Vasishtha, & later Viswamitra, who did attain true knowledge of brahman, the Absolute Reality or God, were called not merely maha-ṛṣis but brahma-ṛṣis, a term that denotes a ṛṣi of the highest order.  Hence many people feel that it is not particularly appropriate to apply the title "Maharshi" to Sri Ramana, who had attained true knowledge of brahman, & who therefore can be accurately described as Existence nothing less than a brahma-ṛṣi.

Besides being not particularly appropriate, the title "Maharshi" sounds rather cold & distant when applied to Sri Ramana, so rather than referring to him as "the Maharshi", his disciples & devotees usually prefer to refer to him by the more affectionate & respectful title "Bhagavan".  Here we will refer to him by his personal name as "Sri Ramana" or "Bhagavan Ramana".

To all those who have followed his teachings & thereby attained the blissful state of true Self-Knowledge, he is "Ramana", the beloved giver of joy, & "Bhagavan", a gracious embodiment of God, the Supreme Reality, which he discovered to be his own True Self, & which he prompted & guided each one of us to discover likewise as our own True Self.  Sri Ramana is not merely an individual person who lived sometime in the Past, nor does he belong to any particular religion or culture.  He is the eternal & unlimited spirit, the Ultimate & Absolute Reality, our own True Self, & as such he always lives within each one of us as our pure & essential Consciousness of Existence, which we each experience as "I exist".

Bhagavan Sri Ramana never sought of his own accord to teach anyone the Truth that he had come to know, because in his experience that Truth – the Consciousness "I exist" – alone exists, & hence there is no person either to give or to receive any Teaching.  However, though he inwardly knew that Consciousness is the only Reality, he was nevertheless outwardly a personification of Love, compassion & kindness.  Knowing both himself & all other things to be nothing but the Consciousness "I exist", he saw himself in everything, & hence he quite literally loved all living beings as his own Self.  Therefore, when people asked him questions about the Reality & the means of attaining it, he patiently answered their questions, & thus without any volition on his part he gradually revealed a wealth of spiritual teachings.

Many of the answers that he thus gave were recorded in writing, more or less accurately, by his devotees & disciples, but the most accurate & authentic record of his teachings lies in the poetry that he himself wrote, mostly in Tamil, & also in Sanskrit, Telugu & Malayalam. Most of the poetry he wrote was in response to requests made by his disciples, but some of it was composed by him spontaneously.  His poetry falls into 2 general categories – poems that directly convey spiritual teachings, & devotional hymns that convey spiritual teachings indirectly in the allegorical language of mystical love.

Since he was asked questions on a wide range of subjects by people whose interests & level of  understanding varied greatly, the answers that he gave were in each case tailored to the needs of the person he was talking to, & hence they did not always reflect the essence of his Teachings.

Therefore when we read the various records of the conversations that he had with people, they may appear to contain inconsistencies, & to convey no single, clear or coherent set of Teachings. However, a very clear, coherent & consistent account of his central Teachings can be found in his poetry & other writings, & if we read all the records of his conversations in the light of those central Teachings, we can clearly understand that he had a very definite message for all who were ready to hear it.

The Teachings that he gave in later years were therefore derived entirely from his own inward experience, & did not originate from any outward learning.  However, whenever anyone asked him to explain any sacred or spiritual text, he would read it & would often recognize that in one way or another it was expressing the Truth that was his own experience. Thus he was able to interpret such texts with authority & to explain their inner meaning in clear & simple words.

Since the cultural & religious milieu in which he lived was predominantly Hindu, & since most of the people who sought his spiritual guidance were either born Hindus or were familiar with traditional Hindu philosophy, the texts he was most often asked to explain were those of the Hindu philosophical tradition known as advaita vēdānta. Thus Sri Ramana’s teachings are often identified with advaita vēdānta & are taken to be a modern expression or interpretation of that ancient philosophy.

for very succinct summary of the teaching & practice, see:  www.ajatavada.com/
Posted by jstiga at 10:44 AM