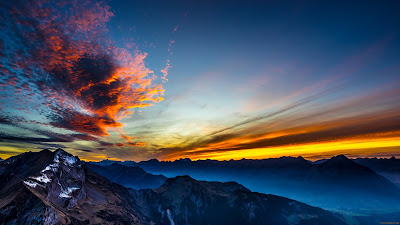 [The "Mind & Happiness" series will be interspersed for a while with insertions from the previous "Reality" series, picking up at this "Reality 77".]

Reality as It is:

There is One, which dwells in all of us, which is All, & which utterly transcends all. That One is the Real Self, the Abiding Truth, the Non-Dual Reality.  By your own Self-Inquiry & Knowledge of yourself, you come to realize Reality, that is, you come to know the Truth.

Nevertheless, we express a Teaching that points to the Truth, that points to the way to realize it, and then you go within an know it first-hand in a way that is beyond words & beyond thought – beyond an individual Knower & an Object known.

Reality as it is pure, un-mixed Existence. It is not "existence" as merely a "thing", nor as many things, nor even as all things put together, but just Existence without the superimposed notion of anything objective, without form, free of limitations of for  without division, & having no parts.  There is nothing else to divide Existence, to divide Reality.

Reality may also be said to be pure Consciousness without limitation, without individuality, impersonal, without a Subject & an Object, & free of all kinds of division. Reality is also Bliss, which is why when a person realizes the Truth, or finds Reality that person has a Happiness which endures, which does not depend on any cause, which is without conditions, & which is without end.

Reality is homogeneous Existence, this un-limited Consciousness.  Yet if this is not your own experience, why is that so ?  To tell the truth, there is no valid reason why that is so.  Because there is no valid reason, we say, it is because of "Ignorance".  The nature of Ignorance is Illusion, which is something unreal.  While it is not possible for the unreal which has never come to be, to veil or diminish Reality.  Reality always exists, yet a seeker tries to realize Truth, & there seems to be something that hides the Truth.

For someone who is accustomed to meditating in a profound manner & who realizes the World to be within the Mind, the "things" & the thoughts will be regarded as of the same substance. A person seems to be separated from that Absolute Reality, the Supreme Self, though the True Nature of the Self is for Mind, or God.  One seems to be separated from the Absolute by this – by the objective definitions, which pertain to "things" & thoughts.

for very succinct summary of the teaching & practice, see:  www.ajatavada.com/
Posted by jstiga at 6:59 AM