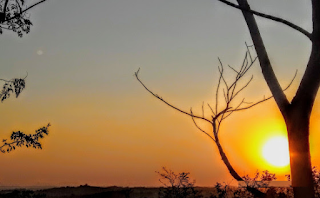 The fundamental difference between the experience of most of us & the Sages is expressed by Sri Ramana in Verses 17 & 18 of Uḷḷadu Nāṟpadu:

That which limits a finite thing is only its form, because its form defines its extent in Time & Space, & thereby separates it from all other forms.  If we are a definite form, we are limited within the confines or extent of that form, but if we have no definite form, we are Un-limited or Infinite.

Because we imagine our self to be the form of this Body, we have seemingly limited our self within a certain extent of Time & Space, & hence we feel our self to be separate from everything that exists outside this limited extent of Time or Space. Moreover, because we imagine the form of this Body to be "I", we mistake it to be real, & hence we mistake all the other forms that we perceive outside this Body to be real.

Since Sri Ramana & other Sages teach us that we are not the Body that we imagine our self to be, & that the World is not real as we imagine it to be, it is reasonable for us to infer that such Sages do not experience their Body as "I" or this World as real. Why then does Sri Ramana say in these 2 Verses that to Sages, who are those who have known themself as they really are, their Body is "I" & the World is real ?

To understand why Sri Ramana says this, we have to understand the exact meaning of what he says in the 2nd half of each of these 2 Verses.  In Verse 17 he says that, for Sages, "I" shines devoid of any limit, boundary, or extent, thereby implying that in their experience "I" is the Infinite Reality that is the Essence or True Substance of everything, including this Body.

Also related to these topics, there are now 8 Kindle books on "Amazon.com", reference-able by the author "John Stiga", each indicated as non–copyrighted, public–domain, & priced at the minimum $0.99 each.
Posted by jstiga at 9:20 AM