Going Beyond Some Basics part 2 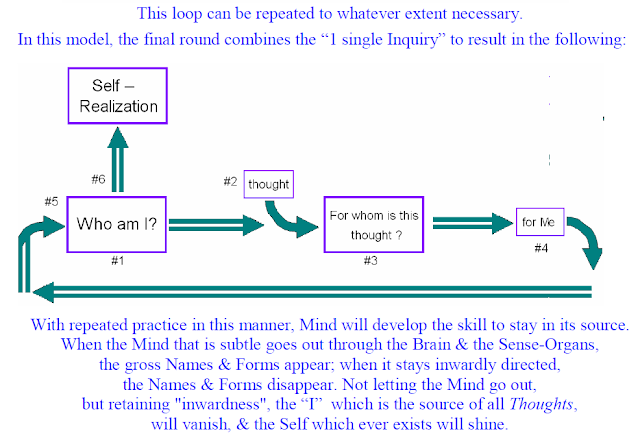 The “Who am I ?” Self-Inquiry, known as Vichara Atma, is a sublime Meditative device for wresting the attention away from the External & Objective so as to focus Consciousness upon Itself, upon the Existence aspect of pure Consciousness by seeking the true "I", the real Self in this open function of Self-questioning.  To question at all is to give rest to the Projection of mental declarations & to switch the Mind into a most receptive mode. When the Mind becomes thus receptive to the Mind itself, on the deeper level, Consciousness is turning in upon itself.  The Answer to “Who am I ?” is of course the true "I" who is also the meditator, but not the thinker. When that "I" reports in the guise of a Body, the discriminating Inquirer should be able to disqualify the Body as "I", but the real trick is to live in that Discrimination throughout Life.

The Body is intermittent & partial in our experience, & has changed completely many times since childhood. Being inert, objective gross matter, it differs too little from a corpse for it to successfully pose as the true "I".  Putting the Body corpse aside, even the Life Force [prana] itself is far too mechanical & insentient to be "I". The Mind full of Thoughts is even more changeable than the Body & is still inert & insentient without the Consciousness that illumines each Thought. Even the intellectual function that carries on the Inquiry is clearly searching inside for something closer to the Self, something more all-embracing & constant to stand for "I" .  When I consider My Mind & My Intellect, what position am I in to so deem Mind & Intellect as objects ? The assumption of Personal Identity, the Ego or I-thought is the last to be discriminated & rejected. Left with Consciousness turned inward & directly focused on "I", the Meditator is afforded the opportunity for direct experience of absolute Self-Consciousness in the deepest way. The irrevocable identification of the Non-Dual Self, Atman, as "I", characterized as Existence itself, as pure Consciousness, as highest Bliss, Sat-Chit-Ananda, one with Brahman is the culmination of Vichara Atma in steady Self-Realization.

The above kind of basic summary will be continued, but for now, more of Master Nome’s discussion of the World within the Senses.

The Self is changeless, continuous, permanent Existence.  The Senses are changeful, discontinuous, & impermanent.  The senses are lost, dulled, or altered in death, old age, & illness.  The Senses change during the lifetime, from infancy until the end of the body. The Senses are changing all the time, transforming into dull & acute states, subject as they are to the three Guna-s the qualities of Tamas (inertia), Rajas (agitation), Sattva (tending toward the light of Knowledge).   Each Sense takes a turn being predominant & fades due to a change of the sense organ, the mental attention, & similar factors.

Samkhya philosophy [nominally atheistic] describes primal forces of inertia, agitation, & harmony, a scheme found to be expedient for partial half-step explanations within Vedanta.  The point throughout that short paragraph is that Sense change in many ways, all the time, exhibiting no completely steady form or nature.

The Senses appear only in the Waking state.  With each state of Mind, they change. Upon the death of the Body, which is not the Self, the Senses are lost entirely.  Rarely all the 5 Senses are active, or experienced, simultaneously, but Existence is always wholly present. The Senses are just a momentary function. The Self is steady, self-existent Reality, permanent, & not a function of some other thing.

Unlike the steady Self, the Senses change for the Dreamer, or even when the seer becomes the listener.

The Self is Being & not a doing or activity. The Self is not determined by any conditions & is itself without any conditions whatsoever. The Senses, though, are determined by conditions such as the state of the sense organ, the environment, the experience of which is the result of the interaction of what appears to become split in Consciousness – that is, the object & the instrument used to know it.  The Senses are also determined by the mental attention given to or removed from the Senses.  From a higher view, in the One Mind, all 3 mutable factors appear [organs, environment, attention], determining the 5 sense experiences.  Partless Existence, which is the Self is beyond the changeful appearances in the Mind.  So, how can the Senses be considered to be the Self ?

The Senses are part of the Body.  The Body is perceived only by the Senses & has no reality apart from them.  Each illusion depends on the other.  Such illusion is like the painting of Wall that is painted on the Wall depicted, when the Wall itself has not yet been built.  The Self is bodiless & is not a part of the Body or associated with a location in relation to a Body, unlike the Senses. So, how can the Senses be considered to be the Self ?

Like the "strange loop" [ala Douglas Hofstadter] Image that has itself again in the image, & even more convoluted than that, the Senses are housed in & are part of the Body.  But the Body is only known by & in the Senses, just like the rest of the World.

The Senses depend on the Self.  The Self exists as it is, innately non–dependent on the Senses. This is the highest state of detachment. As pure Being, one is always detached from the Senses &, thus, to the whole World.

The above highlights the relationship between the Senses & the World. The World is known by & actually "exists" only "in" the Senses.

"Knowing" by the Senses is a small & unreal part of knowing, while the Self is Knowledge itself

The Self is the eye of the eye, unseen by the eye.  This Self which is formless Being-Consciousness, cannot be sensed & does not have Senses.  It is not a sensing entity, conceived as a nexus of all the sensations, but is instead ever unalloyed Consciousness.

The Self, which is Pure Consciousness, is far more than the limited, fleeting, & ultimately unreal collection of all lesser kinds of knowing.  This one reason why "breath watching" & other exercises in Sense Perception, have preliminary, limited, relaxing value only.

Just as Result in the Cause, so is the Object within a Perception.  The 2 are 1, & unreal.

By this Knowledge, one remains identified as the Self  & not mis–identiﬁed with the Senses, which are unreal.  Let there be this steady Knowledge.  May the un-sensed Knowledge of the Self, free of all the limitations of the Senses, abide.

[The above themes & 1600 pages more are freely available as perused or downloaded PDF’s, the sole occupants of a Public Microsoft Skydrive “Public Folder” accessible through  www.jpstiga.com ]
Posted by jstiga at 7:26 PM