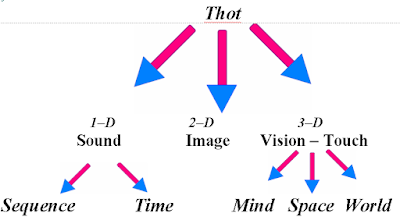 In this installment, we wrap up the current "theoretical" aside, prior to taking up more pragmatic matters of spiritual practice in succeeding episodes.  The final item in our current analogies for the split from Non-Duality to Duality, from Brahman– Atman to aham–idam, Me–This, is a brief exploration of the Ananta–bindu Duality, Infinite Space & the dimensionless Point of Reference.

One fanciful discussion could compare the ancient Number–Line & later, René Descartes' 2–Dimensional, 2–D "graph" to a simple model for the Duality of Mind.  The Egyptians used the knotted anchor rope as a ruler for construction of their pyramids.  This 1–Dimensional, 1–D Number–Line is seen expanded into 2–Dimensions, 2-D, in the knotted fisherman's net.  This kind of 2-D "grid" appeared in early Grecian Latitude & Longitude, Geodesy.  Preserved as an idea by Islamic philosophers, the very same grid in European – then – Islamic – then European gave birth to architecture, perspective, & other Realism's in Renaissance art.

Descartes generalized the "graph", but 1st we can look at the 1–D Number–Line as a model 1 model for Mind, in the sense of a "train" or sequence of thought.  Each knot or Point on the line is a thought, or the abstract underpinning of thought – moments of Time.  The central Point, Me, or Ego, is the Reference for each thought in the stream.  As originally stated in "Reality 02 & 04":

"What makes thoughts apparent is their limited duration in Time, & the fact that each is a "dyad" a "dipole" of objective thought & reference – "me".  A thought of "bad" is bad for me; good for me; near me; far from me; important to me; etc.  More of this Ego–me at a later point."

In the realm of Sense perception, the 1–D stream of Sound also has is the central Reference or Origin for each "note" or syllable in the stream.

Now just as there is some 2–Dimensional aspects to the Auditory sense of Sound, the Mind has a 2–D aspect in what could be taken as the imaginary Screen of the Mind.

Likewise the Mind has a 3–D aspect in what could be called the imaginary 3–D Theater of the Mind.  But in each case, Me, Ego is a central Reference Origin Point. All other Points in 1–D, 2–D, 3–D only have meaning as a Dependent Originating Duality referenced to Me.

The point of using these Analogies is to provide some "concrete handle" on the aham–idam, Me–This, Duality & to use the Ananta–bindu Duality, Infinite Space & the dimensionless Point of Reference to highlight the illusory inversion involved.

The World brings up an interesting issue in that the Body could be considered the central Origin for all other objects.  But the Body is not a point.  So sometimes the Origin "point" is really a smaller Coordinate Space in itself.  Inside of that Body, that smaller Space could on turn have some central Point in a Brain to be a smaller Origin Point.

But on the scale of the World, or the Universe the Body is a Reference Origin Point for Objects in the World.  This peculiar duality of extended Origin Points being small Coordinate or Container Spaces in themselves.
In this Macro–Origin / Micro–Container Duality, we see that one's "Vicinity" that surrounds Here serves that role in the larger scale of the Universe.  Likewise one's Lifetime serves a dual role of Macro–Origin / Micro–Container in the range of Time.  These peculiarities of infinite Container Space, dimensionless Point of Origin, Coordinate Points referenced to the Origin, & dual aspect Macro–Origin / Micro–Container "Vicinities" –  all this displays remarkable similarity in all the Analogies.
These are Analogies for how the Mind conceives itself, the flow of Time, the stream of Sound, the expanse of imaginary Vision, the Theater of Space in the Universe of Objects.  The same illusory Duality is repeated throughout.
And so goes our current "theoretical" underpinning.  In the next installment we apply some of this to pragmatic spiritual practice.

for very succinct summary of the teaching & practice, see:  www.ajatavada.com/
Posted by jstiga at 3:16 PM