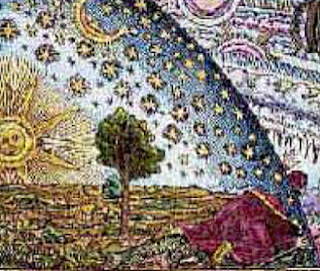 Aside from Sense–Perception, other activities of Mind could be considered to be Conception.  In Sri Shankara's Bhashya to the Karika composed by his Param–Guru, Gaudapada on the Mandukya Upanishad, the great Sage Shankara expands on a reference to "4 quarters", as comparable to an analogy based on an ancient Indian coin, one with 4 sectors,  each of a different metal.

In ancient days when coins were hammered together in small numbers, a copper Penny could perhaps be the basis for a Nickel 5 cent piece by adding 4 cents worth of nickel metal around the original Penny.  This composite nickel in turn could be up–valued to a Quarter by hammering an additional 15 cents worth of Silver around that Nickel.

Finally, the Quarter could be set within a gold $1 piece, from decades past.  The net effect could be envisioned as a bulls-eye of concentric metals, representing concentric realms.

The overall gold would stand for Enlightenment, Consciousness, the 4th State, Turiya. Such stands for the  background of silver Quarter, which in turn could stand in for Mind-less, Deep, of dormant Primal Ignorance, Avidya, appearing within Consciousness. Likewise the 5 Cent nickel represents the Mind, or the , again contained  within the silver Quarter.  Those portions of Mind, other than dream-like Conception, could stand in for all Perception constituting a , the copper Penny. Within the Nickel each bit of Penny is an apparent material Perception/Object in the .

In this way the Universe and the Body are within the Mind as Sense–Perceptions, along with all the other dream-like Conceptions and imaginations of the Mind.  Mind is only a collective term for the bundle of thoughts, each thought an insubstantial nothing within Consciousness.,  All thoughts are referenced, based on the primal Ignorance of the aham–idam, Ego–me / Duality.

Ultimately dis–identification from the primal Ignorance of Individual Identity, Ego is tantamount to Liberation.  But in this installment, with the Coin analogy, the emphasis has been dis-identification from the Mind, the bundle of thoughts, were each thought is objective, though subtle, and not the truly "trans–subjective" Atman Self.  Each thought is referenced to the Ego as its Origin.  Whether it be subsidence of thought, or disbelief in the reality of thought, transcendence of the Mind, that still deeper mis–identification, is essential to Enlightenment.

for very succinct summary of the teaching & practice, see:  www.ajatavada.com/
Posted by jstiga at 12:36 PM