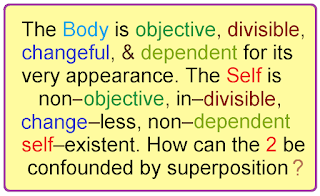 Within an illusory objective Universe, the Body is like the "token" on a game board, the representative concrete form of an false Individual.  The Body in the is considered to be composed of Matter, that in the , composed of Dream– Matter. Or the same Dream– Matter when seen from the is clearly composed of thought.

In fact in whatever State of , Waking or Dream, the Body is composed of thought. In the , there is no Body, there is no Mind, there is no World, and yet there is Peace & Happiness, such as is a topic for further consideration later.

The Body houses the Brain which is considered to be the source of the Mind, in the objective point of view.  The Body also houses the Sense organs which are thought to perceive Sense data.  The Sense data are said to make us aware of Objects.  But only the Sense data, the Sense–perceptions themselves are directly experienced.

To discriminate the unreality of the Body, to break attachment to the Body, and to dis–identify from the Body is perhaps the single largest step in the process of Self–Liberation.  The Desire for Liberation is the desire for Happiness, & this is what impels in the spiritually mature, what the drives the desire to transcend Identification with the Body.

On the level of seemingly physical Sensation, one need not expect the Body to vanish or not otherwise diminish, other than in its natural course of aging, decay, & death, or accident.  But Identification with the Body is not only unnecessary, it is illusory & productive of Suffering.  The Body is a "bag of salt water", as it were, in a Universe of sharp objects, ever vulnerable & periodically the focus of suffering.

But just as the Dream Body vanishes upon awakening, so too does Identification with the physical Body vanish upon spiritual Awakening, Enlightenment, Liberation, Release, the goal & purpose of life, perfect & lasting Happiness.

The further confusion posited in the Brain, as a physical symbol of the Mind is a topic for a later installment


"There is no Creation, no Destruction, no Bondage, no longing to be freed from Bondage, no striving for Liberation, nor anyone who has attained Liberation. Know that this to be Ultimate Truth."  –  the "no creation" , Shankara, Ramana,  – Ajata Vada

for very succinct summary of the teaching & practice, see:  www.ajatavada.com/
Posted by jstiga at 12:32 PM