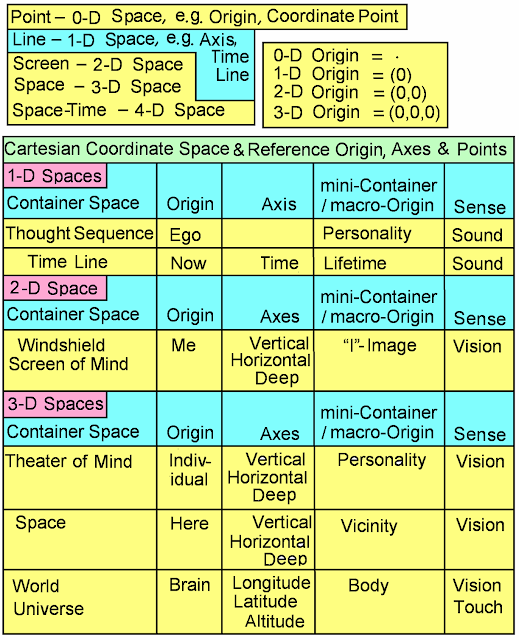 How can the previous "theoretical" underpinning be parlayed into pragmatic spiritual practice?  Well, some may skip the next step, after finding it too difficult.  But making some headway here is of an estimable value.  The point being: the World, the Universe is not real.  We mentioned that only Sense–perception thoughts are actually directly experienced, with no proof that there are all the objects of the Universe that they pretend to perceive.
The analogy of the Dream was briefly introduced, & will appear again here from time to time.  Finally the structure of the Mind, even in some mathematical terms, was initially explored.  The Mind tends to be felt as some kind of vast, empty "Container Space".  The false Ego–self is felt to be the center Origin for the Space if the Mind.

For the stream of thought, the Mind is a 1–D Number Line, like Time or the sequence of Sound.  For the Imagination, there can be there can seem to be a 2–D Screen of the Mind, or a 3–D Theater of the Mind.  In whatever Dimension, the empty Container Space has each object or Point in it referenced to the central Origin.  Each Point has meaning only in terms of that Reference Origin.  So for all of the supposed Perceivers of the Universe, there is a uniquely different Universe that each perceives, being only the referenced Sense–perception thoughts, differing for each Ego Reference.

And then there is the similarity between this empty Space – central Origin scheme seen, seen not only in 1–D Mind, but also in 1–D Time & Sound.  In 1–D, Now takes the form of the Ego for the central Reference Origin in Time.  It is Here that takes the central Reference Origin in or Ego form for the 2–D Screen of the Mind, the 3–D Theater of the Mind, & 3–D Physical Space.

As a repository for Identity–Existence, Reality–Consciousness, & Bliss–Happiness–Love, the World as an external supposed Source that can never deliver.  Happiness is the very nature of the Absolute Self, Atman which is Brahman, The Absolute.  To remove one's seemingly fundamental belief in a World, a Universe, is to remove the objects of Attachment & false seeking of Happiness, or its loss as Suffering & Aversion.

Likewise, for Reality & Identity in that World.  For those who put off this Discrimination & Detachment, they may instead see the "World" as an aspect of God with Form, while remaining devoted to Brahman, God without form.  But to dispense with the World is cleaner and more direct.

So it is, that in this installment we look a little further into the denial of the World, as a an initial pragmatic spiritual practice.  Ultimately we want to explore the Ego–Me & find it to be nonexistent, thereby discovering instead the true Absolute Self, Atman–Brahman.  But seeing past the World removes the underpinning of binding & blinding Attachment, & is a good beginning for true spiritual Discrimination of the unreal from the Real.

The world is also that which is the host or home of the material Body.  Those trillions of separate cells that somehow coordinate to provide one active character, one apparently thinking Brain, that Body, to be further discussed as we proceed, is – this is fundamentally part of the World.

But how can all those trillions of cells somehow coordinate to be one body, with quadrillion's of neural connections that serve as a Mind that can think. As we will so often say, one is "not the Body."  One beginning for this realization, is that there is no World, no Universe.

Not only is the Body made up of quadrillion's of neural connections among trillions of cells, but across the Universe, at least the Relativity–limited, only knowable Universe, is said to be made up of 1080 quantum particles that go into the makeup of Plasma, Atoms, Molecules, Stars, & Planets.

But between each Atom there is a empty Void of Space,  Parmenides, Zeno, & Melissus, the Eleatic Greek philosophers Sages argued at length against the impossibility of Void "nothingness".  For "nothingness" is not "some thing".  They argued against the contradictions in an empty Gap or Void between atoms.  In fact within Space or within any conceived Continuum, the Gap between 2 discrete entities A & B is neither A nor B, nor anything else.  The Gap simply does not exist.  This does not argue against Continuum as much as it argues against its opposite Discrete Spectrum, for Analog against Digital, for Relativity against Quantum Mechanics.

Atoms are so tiny & so numerous that if the entire Earth were carved out hollow & stuffed to the brim with Grapes, the hollow Earth would hold as many Grapes as we gaze upon the thumb of one hand.  With all of the emptiness & all of these impossible Void Gaps, the objective Universe is not plausible, never mind the suspicious Container Space – Origin structure so often repeated, & never mind the Ego– referenced Perceptual thoughts which are all that we seem to experience.

And taking any quark or quantum particle, we cannot assume it is a "solid" thing anyway, emptiness aside.  The Quantum Mechanical Wave Function that describes the concentrated Energy known as Matter does itself only consist only as "Probability Amplitudes" in an unreal realm of what Aristotle called a Realm of Potentia.

Only when observed by Consciousness, according to the original Copenhagen Convention in Quantum Mechanics, only then for a moment of Observation does the Wave Function "collapse", & only then does the Quantum take on momentary material "existence", seemingly.  So Matter is only abstract Probability Amplitude in an unknown, unreal Realm of Potentia, becoming so-called "real" only instantaneously, during conscious Perception.

Within the vast empty Space containing Matter are the impossible Void Gaps. Whatever could "be" in aside from that Void Gap is only known as a referenced Sense–perception, and all that is just as a Dream known only in the Mind of the seeming dreamer.

experience, philosophically examined in ways like this, can prefigure direct Detachment from a Universe & thus propel one's spiritual practice by erasing Attachment & fall seeking for Happiness, Reality, & Identity in a World.

Or else, seeing the World as God–with–Form, we can proceed to the next spiritual step as, as we do in the next installment, by looking at the Body that houses the Sense organs that presumably capture in Sense–perception, (but only in thought), the objects of the Universe.  Aside from the individual Reference Origin, different for each apparent Observer, we will further explore the implausible Identity of the Experiencer of the , the apparent Waking State Body.