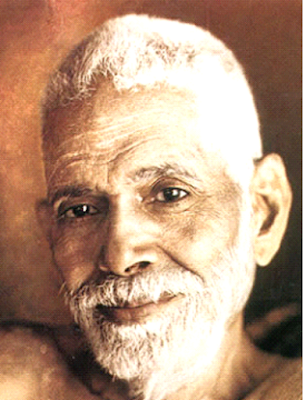 
With no Delusion, there is no Birth, as no Cause means no Effect. If there is Freedom from Delusion, even the notion that one has been born is absent; so how can there be birth again when there has never been birth at all for the Self ?  "I" & "this" are non–existent in the Knowledge of the Self.  So the false notions, "I am this, this is mine, this is so, I am so, & another is not so," –  these are also absent. One who has realized Self-Knowledge is, as the Maharshi states, though in the yet like one in Deep Dreamless Sleep.  Though perceiving the World, yet he does not; though acting, he is really actionless. The sign of the true Knowledge of the Supreme Truth is Liberation, complete Detachment from all that is unreal, & being ever Space-like.

The World consists of diverse Multiplicity, which is a function of the Mind.  The Mind shares the Reflected Light – the Light reflected from the Self.  Images in the Cinema are seen only in diffuse, artificial light, but not in a strong glare of a thick darkness.  So also the images the make up the "World" are perceptible only in the diffuse, reflected light of the Self through the darkness of Ignorance.  The World cannot be seen whether in pure Ignorance (not–knowing), as in Deep Dreamless Sleep , or in pure Light as in Self-Realization.  Ignorance is ever the cause of Multiplicity.

for very succinct summary of the teaching & practice, see:  www.ajatavada.com
Posted by jstiga at 1:23 PM