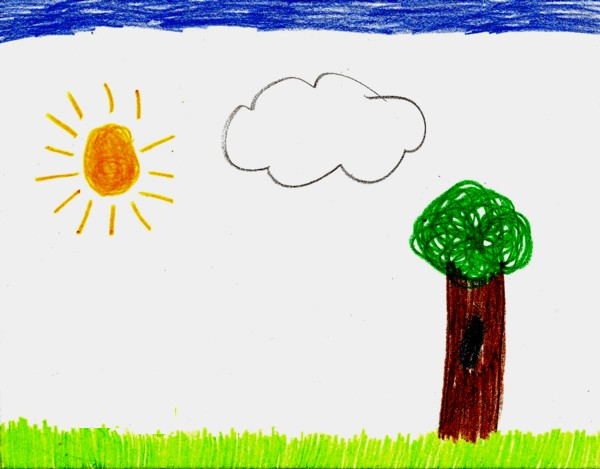 It is no exaggeration to say that the "World" we see in front of us is no more real than a child's crayon–drawing of a landscape with Lollipop Trees.  These Lollipop Trees as they are called in one idiom, with "sticks" of brown to represent each tree trunk, topped by a swatch of somewhat circular green crayon to represent the massive leaves.  Like a green Lollipop, such as simple symbol is called a Lollipop Tree.

No one takes such to be a literal rendition of a tree, but most can recognize the intended object of this depiction. Well, on a more complex & sophisticated level, our entire Perception of the outside World is like that Lollipop Tree, only a little bit more complicated. When physiologists of Perception pin down what amounts to an image on the Retina, they find it to be a muddy, swirly "motion picture" rather than a crisp clear photographic image. Such is transmitted somehow along the Optic nerves to the Brain & somehow to the Mind, whatever that is, interpreted into a crisp clear "Koda-chrome" photo, or motion picture.

How can this be so ?  Backing up a bit, we can look at some classic experiments in the Physiology of Perception.  Our eyes invert the image of the World in front of us & our Brain re-inverts it into it back into a right–side–up World.  When (foolish) volunteers fearlessly agree, for a small amount of research payment, to wear lenses that invert the World in front of them, researchers find that the mind can adapt to this.  They actually start to see the World right–side again, even up through these inverting lenses.  Wearing these for a short time, & then having the glasses removed, the subjects find an upside–down World in front of their eyes.

But then after a certain amount of time, some days or so, the Mind re-inverts the World again & everything is back to normal, hopefully, thankfully.  So it is with the muddy "motion pictures" focused on the Retina, & all the missing information that the mind fills–in [Blind–Spot Black–experiment]*.

In fact, comparing the amount of information taken in by the Senses, that transmitted to the Brain & the image we seem to experience, some of the following basics seem to apply:

(1)  The "outside" it is far too vast to be taken in to any large degree.  Only a fraction is taken in.

(2)  Of that which is taken in, not enough remains to make a clear image. The Mind uses customary expectations & "fills–in", the empty spaces with what is expected.

(3)  In the end, between inversion, attribution of colors, & "filling–in", the Mind very much "creates" the perceived image – vision, sound, touch, etc. –  that we take to be an objective outside World.

(4)  In fact it can be truly said, that we have no idea what the outside World would really seem to be, or if there is even is an outside World.

Fast-forward to the Copenhagen–Convention of Quantum Mechanics in the early 20th Century.  Double–Slit experiments, Delayed Double–Slit, & so on, all point to an amazing conclusion. The Intention, Perception, & Consciousness of the experimenter has an influence on the basic Quantum phenomena observed & recorded.  Somehow Consciousness seem to come in to the apparent unfolding of the World.  This leads those Copenhagen–Convention of Quantum Mechanics or Quantum Physics to propose that the World is Consciousness, a "Quantum Idealism", as it were.

All this is later rejected in the mid-20th Century by the on-slaught, or on-swell of predominant Mechanistic Atheism, characterizing 90+% of Physical Scientists.  Philosophers comes shortly behind with some 85% dedication to complete Mechanistic Atheism.  With the "Consciousness–created" Reality of the Copenhagen Convention in the Quantum World pushed aside, many other mysteries of the Universe & our Perception of it are similarly pushed aside.

To preserve that Atheism, a fantastic 10500 – fold Mechanistic Multi-Universe is hypothesized &, by the majority, attested to, as the most quote "plausible" explanation. But the original Quantum Idealist would say that, at best, the Universe perceived is sketched out in Lollipop Trees, so to speak.  If the Universe is there at all, Bishop George Berkeley continued Descartes's BIV, "Brain-in-a-Vat" & Plato's Cave–Allegory to the declaration that: the World is in the Mind.

At first, officially backing off, if only to retain his religious pay-check, the Bishop in later life reverted & fully admitted his conviction that indeed the World is in the Mind. Contemporary Turkish publisher Harun Yahya & many other unlikely compatriots throughout the ages & throughout the continents have chimed in with Bishop Berkeley.

But following Analytical Philosophy, the Idealism of the 19th Century Europe was pretty much stomped into oblivion, even before Quantum Idealism's attempted revival. Advaita Vedanta takes up a different tack, by direct, inner, subjective experience & unmistakable agreement across many cultures, many continents, thousands of sages, men & women, that: indeed the World is in the Mind.  And that Mind itself is in Consciousness, & that Consciousness is the Universe.

So we live among the Lollipop Trees, content that this is a "real" World, like the apparent "reality" of every lucid nightly Dream.  But as Dreams follow each other in the course of an evening, so are life-times said to follow each other in the course of "Re-incarnation".  Such is the approximate Qualified Non-Dual view of Reality.  In the Un-Qualified Non-Dual view, even this Dream / Re-incarnation picture is itself only a Dream.  None of it stands as Real, alongside of Consciousness.

The Mind is made up of images & words & symbols, illumined by the light of Consciousness.   Those images & words & symbols are but effervescent & momentary. Consciousness is steady, Eternal, Un-changing, & Un-limited.  A good name for this Non-Dual Reality "God" or in other languages Brahman, the Buddha–Mind, the Tao, the "First Principle" of the Eleatic Greek Sages, the "Godhead" of Meister Eckhart, & so on.

So ours is a choice, to live among the Lollipop Trees as another Lollipop, or to claim our peerless, Un-changing, Unborn, & Everlasting Freedom as Consciousness.  The shift in "perspective", if it can be lowered to such a depiction, is well worth the effort, even if that effort should seem to be long-lasting.  For the result is the inner, subjective, Un-limited Happiness.  That is the same as the Consciousness & is the actual Existence of oneself.

When I assure myself that I exist, I also notice that I know that I exist so Existence & Knowledge / Consciousness are one.  That same inner depth is where Love, Happiness, Joy, & Peace are ever found.  They actually never waver, even if our focus on them does waver, only to finally rest unceasingly there as Consciousness–Bliss, as Existence itself.  This is to escape the child–"World" of Lollipop Trees & rest in Reality.  This is Enlightenment, Liberation, Heaven.

*  Many have experienced, & anyone can "Google", the "Blind–Spot Black–Dot experiment.  Directed to the Optic Nerve connection blind–spot on the retina, any "black-dot", or any other detail, will be replaced by an assumed continuation of the background, be that white–space, floral–wallpaper, or whatever it might be.