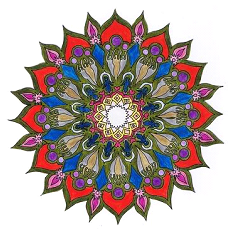 Ribhu Gita (Tamil) Ch 35:
(2)
When inquired into,
All names and forms that appear as differences in Brahman,
Of the nature of the one undivided Essence,
Not different from the incorporeal Existence.
The Self, are not different at all.
Casting aside everything, with the blemishless certitude that all
Is the peaceful Brahman,
And l am that changeless Brahman.
Abide in your natural Self.

(4)
There is nothing as darkness or light or something different,
This or that, you or me,
Bewilderment or clear perception or illusion,
Mind or its ramifications,
Form or formlessness.
Casting aside everything with the blessed certitude
That all that exists is Brahman, and that I am,
Changelessly abide in the Self.

(5)
There never is any such delusion as,
"This is the Lord and this is the World which is his creation;
I am an Individual here; I am born here;
I am tied by Bondage; I am a Sufferer;
I am the child, I am the adult, the mortal."
Casting aside everything, with the blemishless certitude that all
That all that exists is the differenceless Brahman, and That I am,
Abide changelessly in the Self.


You have to make an enormous effort to realize the Self.  It is very easy to stop on the way & fall back into Ignorance. At any moment you can fall back. You have to make a strong determined effort to remain on the peak when you first reach it, but eventually a time will come when you are fully established in the Self. When that happens, you cannot fall.

You must have a lifelong commitment to establish yourself in the Self. Your determination to succeed must be strong & firm, &  it should manifest as continuous, not part-time, effort. For many lifetimes you have been immersed in ignorance. You are habituated to it. All your deeply rooted beliefs, all your patterns of behavior reinforce Ignorance & strengthen the hold it has over you. This Ignorance is so strong, so deeply enmeshed in all your psychological structures, it takes a massive effort over a long period of time to break free from it. The habits &  beliefs that sustain it have to be challenged again & again.

Don't be discouraged by the length of the journey, & don't slacken in your efforts to get home.


The concept of Space & the erroneous idea that objects have an independent & simultaneous existence go hand in hand.  When this has not been understood, the following question is often asked, usually with a look & a tone of supreme triumph: "If objects are notions that arise & abide solely in my head, should not a distant object, when I think of it, appear just before me here ?". The question is based on misunderstanding.

Determinative thoughts as to Time & Place do not always accompany the thought of an object, though they almost invariably do. They do that with such rapidity as to make the question seem plausible at first sight Yet the object itself, when we are specifically thinking about it, has no location. That is to say, we do not think of it as being near or far, here or there.  The notion of the object is alone present to Consciousness.  It needs a separate thought, or series of thoughts, to situate the object in relation to others [near or far, here or there].

This will be evident if we consider the sort of Sensory impressions spontaneously evoked by the words "here" & "there".  And besides, the same Memory which makes us believe in the simultaneous existence of objects will not allow us to see a mountain on a writing desk.

Abstract thinking, like Space, Location, Distance, Proximity, & Direction are abstract terms arising out of present Perceptions, without which they would be meaningless. These convenient generalities we tend to convert into absolute entities. It must never be forgotten that whenever we use such words, we are speaking of actual images or Sensations, however vague they may be. For there is no difference between mental & physical awareness.

In one sense, you are enjoying more, but you are not enjoying the object. Track the Bliss. Of course, you are feeling happier, because you are clearing up the question of what is Real or not, Who you are & what is not who you are. Therefore, the Bliss is shining. Now, do not be so silly as to make a Superimposition regarding the Bliss, & think that you will find Happiness in the given activity itself.  Otherwise, you may merely become the author of a book to be titled, 'The Joy of Whatever" instead of realizing the Eternal, nondependent Bliss of the Self.  Whenever Happiness shines in your experience, it is your own True Nature shining, & to the degree that you remove the false definitions that hem that Nature in, to that degree the Bliss shines all the more for you.

If in our Waking Dream, we imagine some other scheme of “reality”, then we feel there must be some explanation for it.  The explanations usually given are that God, or the Supreme Self, has created it or has dreamed it. The original purpose of such explanations was to guide the seeker's Mind to the Self, which is the Source.  If you think that there has been creation, you should go to that Source. All the explanations are originally intended to point one to pure Consciousness & not make one think in terms of the objective or manifest thing as actually created or happening.

"There is no Creation, no Destruction, no Bondage, no longing to be freed from Bondage, no striving for Liberation, nor anyone who has attained Liberation. Know that this to be Ultimate Truth."  –  the "no creation" , Shankara, Ramana,  – Ajata Vada
Posted by jstiga at 8:17 AM