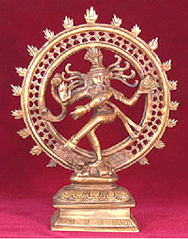 Ribhu Gita (Tamil) Ch 35:
(10)
There are none of the delusions of the Mind such as
The extensive variety of sins and duties,
The plethora of prescriptions and proscriptions.
The worship with attributes, devotion, the knowledge
of attributes,
The real and the unreal.
Casting aside everything with your inner steadfastness in the certitude that
All is the divisionless Brahman, and That I am,
Abide changelessly in the Self.

(11)
There are none of the specious notions of the various kinds such as
Meditation on the qualityless nature
And knowledge of the attributess form
And the bondage arising out of Duality
And the Liberation of being the One.
Casting aside everything with your rare steadfast certitude
That all is the motionless Brahman, and That I am,
Abide changelessly in the Self.

We have to give up all the things of this world, and all other worlds, and direct all our attention towards the Self. If we want anything in this world or the next our energy will be dispersed in these desires, and to fulfill these desires we shall have to be reborn again and again.

To find the Self, to find what is real, you have to look inside yourself.

Turn to the light within all the time.

You dissipate your desire for the Self by undertaking all kinds of useless activities that waste your time and lead to attachments. You think that your life is endless and that you can put off meditation till a later date. With this kind of attitude, you will die filled with regrets, not filled with peace.

Remembrance is merely one kind of thought amongst others, each Memory forming the present, & therefore an entirely new, object of Consciousness.  It is impossible to live in the World unless we accept Causality [Cause & Effect], but it is impossible to understand the nature of the World when Causality is accepted.  Its acceptance amounts to granting the independent & simultaneous existence of objects, any one of which may be acted upon by another. This we have seen to be an impossibility, for an object cannot exist unless it is thought of, & 2 thoughts cannot occur simultaneously.

If, however, we grant for argument's sake that objects could exist independently of their being cognized, we should still be unable to allow the relation of Cause & Effect. Strictly speaking, it is only after the occurrence that we can take it to be the Effect of a Cause, by which time the ostensible Cause must be presumed to have passed over entirely into the Effect.  The 2 never are observed in concert. Causality is therefore a meaningless term.

Notwithstanding the fact that all men experience the Self as an unbroken continuity, they normally take no note of its Existence excepting as the Subject to whom Objects appear discontinuously. This is to be expected, for they have not looked into the nature of Deep Dreamless Sleep.  Moreover, because they always emphasize the objective side of their experience & overlook the subjective, they transfer the continuity of Consciousness to the objects of Consciousness in the form of relationship.

Consciousness then appears as the Memory which relates one thought to another. But Remembrance, as already stated, is only 1 kind of thought.  And 2 thoughts cannot occur simultaneously. A thought is the Consciousness of an Object & every new thought bespeaks a new Object. Since 2 thoughts cannot together occur, it follows that 2 Objects cannot coexist. How then could they [the 2 Objects] be related ?

Thus the ideas of Change & Causality are erroneous, for the incident of Change, or the relation of a Cause to its Effect, is a figment. As to the relation of Space to Time, granting the reality of Space when the reality of the perceiver's Body is also granted, several Perceptions are required in order that the Notion of an "extension" may be formed.

Whether there is a real Ego to kill, whether it was ever really there, if there seems to be an Ego, it is best to “kill” it.  The best way to kill it is to find it.  The more one inquires, the less he sees of it.  First, eliminate the tracks it leaves behind such as the actions, the "I-am-the-body idea" & so forth & so on. Then eliminate its thoughts.  Get to what the Ego, itself, is.  If you hold on to the Ego–"I" then its "I"–ness disappears & only an "I"–less "I" remains.  The Maharshi has said, "If we penetrate into the heart of the Ego, only the Self is there."  He said so because, in Truth, there is only one "I".  If there is an Ego, hunt it down & slay it. Your aim is to destroy it.
When you hunt it you find that there is nothing there to be destroyed. That is why it is called Maya. In the ancient scriptures, it is said that it is impossible to explain Maya & that it is “without beginning.” Most think that this means that it has been around for a long time.  That is so [in Imagination & Ignorance]. Yet it also means that it is without beginning, that it did not start. That is why it is Maya.  It did not start. If you think it is existing, it seems to have been going on for a long time, much like, when you start to dream, you feel that the Dream has already been going on.  It seems as if the Dream World has been gong on for a long time, even though it is all just in your Mind. It is like that with the present illusion. It seems as if it has been there, but really it has never been there.

Inquiring to know the Truth & getting a good grasp of what this Illusion is, [it turns out, one finds that] there is no Illusion at all. There is nothing to it. It is like bringing a light & grabbing the proverbial Snake to find that it is just a Rope. Nevertheless, you need to bring the light in & see it for yourself.

[COMMENT: Not to be disrespectful, but some may recall from The Matrix movie that similarly“one must see it [the Illusion] for yourself.”]
[in response to a questioner who feels the Ego Illusion to be a way he “boxes” himself in]
When you see yourself building the “box”, you can just as easily dismantle the box. If you think the “box” [on the other hand] comes pre­packaged, & that you are just in it, it seems a mystery as to how to attain your freedom.  But seeing how you, yourself construct the Illusion of Bondage becomes the way to your Liberation.  Your aim should be to look into the "I." If you feel that the "I" is just a thought, a notion of Individuality that rises & falls, your aim should be to know & establish your Identity as That which sees the rise & fall even of the "I".  That alone is the true "I" & there is where your Identity ought to be.

"There is no Creation, no Destruction, no Bondage, no longing to be freed from Bondage, no striving for Liberation, nor anyone who has attained Liberation. Know that this to be Ultimate Truth."  –  the "no creation" , Shankara, Ramana,  – Ajata Vada
Posted by jstiga at 6:11 PM