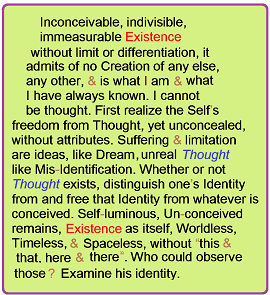 
Through information, digging, & casting aside the stones, a treasure may be found, but not by calling it to come forth.

The products of natural Causation, from the idea of Doership down to the Body itself & all its Senses, are also unreal in view of the way they are changing every moment, while one’s True Nature itself never changes.

Give up identification with this mass of flesh as well as with what thinks it a mass. Both are Intellectual imaginations. Recognize your true Self as undifferentiated awareness, unaffected by Time, Past, Present or Future, & enter Peace.

So long as even a dreamlike awareness of yourself as an Individual in the World remains, as a wise person, persistently see to the removal of all ideas of additions to your true Self.

The tendency to see "me" & “mine” in the Body & the Senses, which are not oneself, must be done away with by the wise by remaining identified with one’s true Self.

The sage who stands in the Eternal, the Self of being, ever full, of the 2ndless Bliss of the Self, has none of the hopes fitted to Time & Space that make for the formation of a Body of skin, & flesh, subject to dissolution.

When the false self ceases utterly, & the notions of the Mind caused by it come to an end, then, by discerning the hidden Self, the Real Truth that "I AM THAT” is found.

(11)
That I am ever the Individual subject to Bondage,
That I am ever Brahman without Bondage.
That all this wondrous World and such are unreal —
All such perceptions are of the nature
Of the all pervasive Supreme Brahman.
By such exalted certitude of the undivided Absolute,
Abide as the taintless Supreme Brahman alone.

(12)
All the ideas that cloud the Mind.
Such as the actions to be performed daily,
The steadfast devotion.
The endless contemplation of God,
And the worship at shrines,
Are all of the nature of the exalted Supreme Brahman.
By such profound certitude of the undivided Absolute,
Abide as the taintless Supreme Brahman alone.


(14)  From controlling the Prana, the Mind is dissolved.
From thought of the One, that Mind reaches destruction

1. Prana does not know. When suppressed or controlled, it does not know it is so.  If Prana dissolves or merges, it does not know in what it dissolves or with what it merges.  2. The Mind does not know. When dissolved or merged, it does not know in what it is dissolved or with what it is merged.
3. The one Consciousness alone knows. The Mind is not a 2nd knower. It is merely the Known & cannot know the true Knowledge.
4. Alteration, reduction, dissolution, etc. of objective appearance, such as Prana, alters, reduces, & dissolves the activity of Mind.  This is not final, for it is not Absolute.  Non-objective Self–Knowledge alone destroys Illusion.
5. Contemplation of the One becomes singular contemplation in which there is no division of contemplator & contemplated.
6. Thought cannot know. It neither knows itself nor other thoughts. It cannot know the Self. In the thought of the one Self, it is the knowledge–essence that shines.
7. If that which appears as thought turns inward in a singular manner, the Mind is destroyed, & only the one Consciousness remains.
8. That which appears as the One Thought, which is the thought of the Absolute Self, of the non-objective & Eternal, of that which is thought–transcendent, is in essence really not a thought–form at all. The One Self shines for itself.
9. Due to is a singular contemplation, from the One Thought of the One, the Mind is said to then reach destruction.  How can the Mind reach where it is not ?  That one, undifferentiated Consciousness reposes in the self, as itself.
10. Singularly inward turned, contemplating in the inconceivable, no 2nd Knower is found to exist, & the One alone remains

(15)  With Mind destroyed, for the exalted yogi, because of his Self-Abidance is there anything to be done ?

1. With Mind destroyed, the yogi exist as only Mind–free Being–Consciousness. No Mind is no Individuality. Being–Consciousness exists as itself.
2. The real Self cannot be destroyed. Only the unreal is destructible. The individual Mind is ever unreal & does not realize.  The yogi is solely identified as a real Self, which realizes itself.  The yogi who knows the Self is the Self always.
3. Exalted above the World, Body, Mind, & Ego, the yogi's very nature is in , yoga, with the Absolute Self, for the Self is only one. This is excellent, for such is the highest Bliss.
4. As long as there's nothing else other than the Supremely blissful, Eternal Being of the Self, there will be the urge to accomplish, in order to attain Happiness, to know what is Real, to find oneself.  For the exalted yogi who rests in that as that, there is nothing else to be accomplished.
5, For something else, either as purpose or doer, something needs to be done. The natural state of one's own Self, Being itself, how can there be the ideas of the to–be–done & one who does ?  Does one do anything to exist ?  Is Existence not Eternal but only to begin at a later time ?  The exalted yogi abides in as his own Nature.
6. Since Being is as it is & is Non-Dual, Abidance is Knowledge; not knowledge of or by another, but knowledge identical with Being. Consciousness is Knowledge.
7. Abidance is Being, not becoming another. The Self is Being. Being is not a thing, an activity, or an event.
8. Activity is for the instruments of the Body, Speech, & Mind, or for the Senses, or for the Sheaths ("layers" of Mind).  Free of mis-identification with any of these, abiding as the Self alone, the yogi truly never does anything.
9. Being something other than the Self, doing & the to–be–done, & indeed anything else whatsoever, are entirely in an of the Mind. These are utterly inapplicable, indeed non-existent, for the exalted yogi whose Mind is destroyed & who thus abides as the Self.
10. The destroyer is Siva, the one who remains is Siva, the excellence is a Siva, the yogi Siva, the all accomplishing is Siva, the ever-attained Siva, the Self is Siva, the Abidance is Siva, & Siva is always Siva.  The yogi attains that which leaves nothing further to be attained, experiences the Happiness that leaves no other joy to be desired, knows that which leaves nothing else to know, realizes that which leaves nothing else to realize, & abides as that for which there is no other existence.

Duality is the seeming division of non-dual Consciousness into thinker & thought, or subject & object. The one [thinker & subject] being conscious of the other [thought & object].  Duality is only a figment.  When I am conscious of an object, that is, of a Notion or a Percept, that object alone is present.  When I am conscious of my perceiving, what alone presents itself to Consciousness is the Notion that "I perceive the object".  Therefore the notion of my being the Perceiver also constitutes an object of Consciousness.  From this, a most important fact emerges: the so-called subject who thinks, & its apparent object, have no immediate relation.

That the notions of subject & object are separate thoughts may be seen from the following example, drawn from everyday Life. When we are absorbed in some activity, let us say in reading a book, we experience a steady flow of thoughts relating to its contents. The notion, "I am reading" does not occur while we are thus absorbed.  It occurs only when our attention wavers.

Even when we are not thus absorbed for any appreciable lapse of time, the subject who afterwards lays claim to the action was not present to Consciousness when the action was taking place.  The idea of our being the agent occurs to us as a separate thought, which is to say that it forms an entirely fresh object of Consciousness. And since, at the time of the occurrence, we were present as neither the Thinker, the Agent [actor], the Perceiver, nor the Enjoyer [includes Sufferer], no subsequent claim on our part could alter the position.

The cause of our claiming that which belongs to the Body is to be found in the erroneous habit of mis-identification. If the notions of subject & object are both the separate objects of Consciousness, neither term has any real significance. An object, in the absence of a subject, cannot be what is normally called an object.  The subject, in the absence of an object, cannot be what is normally called the subject.  It is in memory that the 2 Notions seem to combine to form an entirely new Notion, I am the Perceiver or the Thinker.

Now all Notions are more or less complex. Memory is therefore an ingredient essential to the Sense of Individuality. Individuality is the apparent combination of the changeless Self & a changeful Body. Ignorance is the identification of Body & Self &, as a corollary, the personification of the impersonal principle of Consciousness.

Duplicates (but with graphics) have been available on:


for very succinct summary of the teaching & practice, see:  www.ajatavada.com/
Posted by jstiga at 7:55 AM