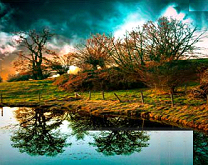 (3)
Except for the Supreme Brahman, which is boundless Being, ever present Consciousness
Of the nature of a mass of unsurpassed Bliss,
Connectionless, without attachments.
Existing alone by Itself.
There is nothing such as the Body and others, ever.
All is indeed. the undivided Supreme Brahman,
And that Brahman, the subtle is indeed myself.
By such pure conviction (bhava) of the Absolute, conquer the Mind.

(4)
Except for the Supreme Brahman,
Of the nature of the blemishless, partless, formless, taintless, peerless, attributeess,
immaculate Self without any false projections,
Which is spread out as thc infinite and the gapless,
There never is anything — ever.
All that exists is the undivided Supreme Brahman,
And that Brahman. without Duality. is myself.
By such conviction (bhava) of the Supreme Brahman, the One, conquer the Mind.

(6)
There is not a bit apart
From the magnificent Supreme Brahman,
The holy Supreme Lord, the Supreme Self,
Of a nature that is higher than the highest and completely, perfectly full,
(If the nature of That which is Truth-Consciousness-Bliss (Sat-Chit-Ananda),
And the undecaying Brahman is myself indeed.
By such silent conviction (bhava), conquer the Mind.

That which dwells within all this, that through which Awareness itself becomes aware, that which exists in each thing as its individual nature, is the true “I”  that shines as pure Consciousness.

The indivisible Reality that dwells within is Consciousness itself.

The Truth of the Self shines as pure Consciousness underlying the Mind.  The fitting course is to discern it in the heart through Being–Consciousness & then to establish it firmly there through deep contemplation, so that the fetters of worldly bondage – the companions of lustful infatuation – disappear, being revealed as the false, & Liberation, the mark of the Real, shines forth.

Bitter worldly bondage arises through the degrading error of mistaking the Self, Being-Consciousness-Bliss, for the insentient body.  It can only be removed through the certainty of the experience of Self-Inquiry that is filled with the divine light of Consciousness.

Know that the perfectly pure Self will well up as a flood of deep Peace in the hearts of those who have come to know Reality as it truly is through Self-Inquiry.  What is required is to perform worship of that Self within a collected Mind, so that the Mind melts away to the power of the true Love that is free of guile.

Turning to the 0ne purified Consciousness within us, the Witness, one should gradually bring it to the fore and then become aware of the perfection of one's True Nature.

Those who focus on the Self that is Consciousness, who have put away the outward, the imaginations of the Mind & senses, & selfish Personality, they are freed from the bonds and snares of the World, but not they who only meditate on what others have seen.
Based on the Teachings of a great Sage:

Duality is the seeming division of non-dual Consciousness into thinker & thought, or subject & object. The one [thinker & subject] being conscious of the other [thought & object].  Duality is only a figment.  When I am conscious of an object, that is, of a Notion or a Percept, that object alone is present.  When I am conscious of my perceiving, what alone presents itself to Consciousness is the Notion that "I perceive the object".  Therefore the notion of my being the Perceiver also constitutes an object of Consciousness.  From this, a most important fact emerges: the so-called subject who thinks, & its apparent object, have no immediate relation.

That the notions of subject & object are separate thoughts may be seen from the following example, drawn from everyday Life. When we are absorbed in some activity, let us say in reading a book, we experience a steady flow of thoughts relating to its contents. The notion, "I am reading" does not occur while we are thus absorbed.  It occurs only when our attention wavers.

Even when we are not thus absorbed for any appreciable lapse of time, the subject who afterwards lays claim to the action was not present to Consciousness when the action was taking place.  The idea of our being the agent occurs to us as a separate thought, which is to say that it forms an entirely fresh object of Consciousness. And since, at the time of the occurrence, we were present as neither the Thinker, the Agent [actor], the Perceiver, nor the Enjoyer [includes Sufferer], no subsequent claim on our part could alter the position.

The cause of our claiming that which belongs to the Body is to be found in the erroneous habit of mis-identification. If the notions of subject & object are both the separate objects of Consciousness, neither term has any real significance. An object, in the absence of a subject, cannot be what is normally called an object.  The subject, in the absence of an object, cannot be what is normally called the subject.  It is in memory that the 2 Notions seem to combine to form an entirely new Notion, I am the Perceiver or the Thinker.

Now all Notions are more or less complex. Memory is therefore an ingredient essential to the Sense of Individuality. Individuality is the apparent combination of the changeless Self & a changeful Body. Ignorance is the identification of Body & Self &, as a corollary, the personification of the impersonal principle of Consciousness.

Your nature is like pure Space, unmoving even when the instruments of body, speech, and mind move. Misidentify and you will become concerned with thinking, speaking, and doing as if they were the "I".  Inquire. Who gets caught up with these ? The Silence is perpetual. It is your real Being. You are not the performer of actions. You are not the doer and not the speaker. Again, "Who actually gets caught up?" Are there 2 of you ?  Is there one that is the real Self and one that gets caught up ?  Thus, there are 2 aspects of the inquiry.

The first aspect, which is primary, is to clarify the dis­tinction between your actual Being, your Self, and the instruments of the body, speech, and mind. When the body moves, you do not move. When the body is still, you are not still. When speech is being used, you are not speaking. When thought is occurring, you are not thinking. You are never the actor, the agent, or the performer of actions, a speaker, or anything similar. To clarify the identity in Knowledge is this first aspect The second aspect referred to is to inquire, "Are there 2 of you, a real Self that is perpetually at Peace in Silence and another "self" that gets caught up? Whose delusion is it?" If you inquire like. this, it is ultimate Self-Inquiry.

The one, Absolute, Non-Dual Self alone exists Eternally.  The Self neither begins nor ends, neither expands nor reduces, has no phase or condition, & is ever just as it is. The Self alone is present always.

"There is no Creation, no Destruction, no Bondage, no longing to be freed from Bondage, no striving for Liberation, nor anyone who has attained Liberation. Know that this to be Ultimate Truth."  –  the "no creation" , Shankara, Ramana, – Ajata Vada
for very succinct summary of the teaching & practice, see:  www.ajatavada.com/
Posted by jstiga at 7:52 AM