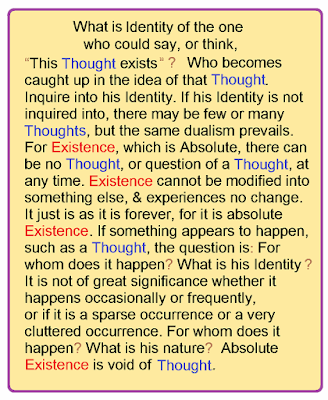 (13)
The sense of possession, which thinks "this is mine, mine,
The Ego which thinks of "I", "I",
The variegated things that are considered internal —
All appearances of such different categories
Are such profound certitude of the undivided Absolute,
Abide as the taintless Supreme Brahman alone.

(14)
The forms of Matter such as Energy, Space, Gas, Liquid, Solid,
The categories of Life functions such as Speech etc.,
The endless variety of the World to which the experiencer is subject.
The millions of galaxies in the Cosmos —
All such baseless appearances of such different categories
Are of the nature of the Supreme Brahman.
By such undiminishing certitude of the undivided Absolute,
Abide as the Non-Dual Supreme Brahman alone.

(17)
All projections that arise as in a picture.
Such as the decisive functioning of the Intellect,
The doubtful functioning of the Mind,.
The ghostlike emanations of thought,
The multiplicity of experiences —
All these activities are of the nature of the Supreme Brahman, Consciousness alone.
By such clear certitude of the undivided Absolute,
Abide as the Supreme Brahman, the mass of Bliss alone.

(17)  What then is the Mind ?  Upon seeking, there is not indeed the Mind.  This is the direct path.

1. The unreal appears as if Real by non–inquiry. Upon Self-Inquiry it vanishes.
2. Illusions, such as the Mind, is only assumption.
3. True knowledge, which is the essence of Self-Inquiry, is not unreal, for the unreal cannot destroy itself or reveal its own Existence.
4. That, which knows that the Mind is it is not is not existent, is not the Mind, & is never non–existent. It is immutable, beginningless, & endless.
5. If one assumes that appearances a real, from the form of thoughts, a Mind is assumed.  If one seeks the Mind itself, there is neither the form no thought, & devoid of assumptions, no such thing as Mind is found to exist.  One Formless Consciousness exists & is Real.
6.  That which does not assume the validity of suppositions concerning what is Real & what is I, but discerns clearly, unimpeded by assumptions, is the Direct Path, for such Self-Inquiry to know itself does not include any of the Dualism that one strives transcend.  7.  To assume the Mind exists & is oneself &, maintaining that supposition, attempt to destroy the Mind & its delusions, is indirect & is an attempt to realize the Truth upon a basis of that which is false.  Knowledge is not attained by means of Ignorance. In the abandonment of Ignorance, Knowledge shines.
8. Comprehension of Ignorance, as being only Ignorance, is its end.  The Realization of the unreality of the Mind is known as its complete, final destruction.  For that which was never born, never existed, there is no return.
9. If there were a Mind, it might divide the Self from oneself.  If there is no Mind, there is no such separation.
10. By the Direct Path of Truth, by the light of Self-Inquiry, in which imagined divisions are no longer assumed, the Self knows itself with Mind–free knowledge, as indivisible one Reality.  What could be more direct than the one Self as it is ?

Many systems of philosophy claim to answer these questions, but not many can offer at the same time the means to experience directly the truths they contain; and when the means are lacking, it is a sure sign that the answers themselves are inadequate.

When the right answers are given & understood, they bring about such a revolution in the Mind of the seeker that until he has experienced them in the most concrete manner, he feels he cannot rest. Advaita Vedanta  or "Non-Duality", and has been practiced in from the most ancient times right up to the present, (though in its purest form it has not been practiced by the majority of that population).

We are concerned with finding answers to our questions. The meaning of Vedanta,is the end or attainment of Knowledge. Here is an attempt to find a solution to those problems which have always faced mankind.

That should be known as Self Realization in which no alternative is possible, in which there is just one infinite, unconditioned, eternal, homogeneous, formless Self, which is not the cause of anything which is not the effect of any thing else, in which there is nothing else, but which is infinite, with no division, no separation, & which has no parts within it. It is Absolute & not in relation to anything else, but just is as it is.  As for anything else, it also is just the same Absolute. To realize this is very simple.  It is simpler than even a thought.  It is simpler than the idea of "I". That divine simplicity lies where you are alone with no "I" to disturb you.

for very succinct summary of the teaching & practice, see:  www.ajatavada.com/
Posted by jstiga at 2:20 PM