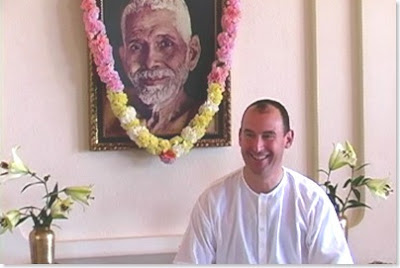 It is seemingly in the very nature of Pure Existence that: if we do not know ourselves, we seem to fall into Illusion. The Illusion is characterized by apparent "mortality". If we are to be free of that "mortality", which runs contrary to our nature, we must seek to be absorbed into Something that is Eternal.  Nothing else can be Eternal but this very Pure Existence itself which is Absolute.  If we take refuge there though, the first thing that will "die" is the Ego–"I"–notion which is the false sense of Individuality. It will be the first to "die" because it will die before the Body perishes.  It will be the first to die because such is the focus for the one who is truly seeking absorption on the Self, the one who is seeking to know the Self.  Methodologies here include "jnana" or Knowledge, & also "bhakti", Devotion & "Surrender" to the Divine.  There is really no distinction, & so we need not overly divide between Knowledge & Devotion.

Sri Ramana Maharshi revealed in his Non-Dual Teachings, which are most direct & immediate, that if the Self remains undefined, it is only Brahman.  That alone exits. Therefore, one should know the Self.  The Knowledge of Reality, which is the Realization of the Self & the Realization of the Absolute, is attained by the direct path of True Knowledge.  By liberating oneself from the Mis–identification with what is not the Self, one knows the Self.  When the real nature of what has been considered as the non-self is seen, it invariably proves to be non–existent, for it was dependent upon Mis–identification in order to even ever appear.  Blissful & Eternal is the Real Self.

“There is no Creation, no Destruction, no Bondage, no longing to be freed from Bondage, no striving for Liberation, nor anyone who has attained Liberation. Know that this to be Ultimate Truth.”
–  the “no creation” school of Gaudapada, Shankara, Ramana, Nome – Ajata Vada
for very succinct summary of the teaching & practice, see:  www.ajatavada.com/
Posted by jstiga at 7:55 AM