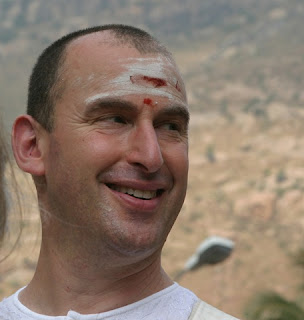 You also become deathless by losing that which is perishing. For one who adheres to the Absolute, what dies first, even before the Body dies is the Ego–"I"–thought, which is the Ego-notion.  To attain that perishing is a wonderful attainment.  It is not fearful, but it is the destruction of all fear. Ego-loss is always blissful. T here is no such thing as fearful Ego-loss. There is fearful Ego-clinging. Where there is Ego clinging, there is fear; where there is the Ego, there is Duality. The Upanishad scripture says, "Where there is a 2nd, there is fear."  A "2nd" refers to someone other than the Absolute.  A "2nd" refers to the Zego, & a "2nd" refers to Duality, which is dependent entirely on the Ego. If the Ego & Duality are present, there will be fear. If the Ego subsides, fearlessness is one's .

Apparent reality is like a Cinema.  The screen is always there but several types of pictures appear on the screen & then disappear.  Nothing "sticks" to the screen, it remains a screen.  Similarly, you remain your own Self in all the 3 States (Waking, Dream, Deep Dreamless Sleep).  If you know that, the 3 States will not trouble you, just as the pictures which appear on the screen do not "stick" to it.  On the screen, you sometimes see a huge "ocean" with endless waves. That disappears.

Another time, you see fire spreading all around.  That too disappears. The screen is there on both occasions.  The screen did not get wet with the "water" nor did it get burned by the "fire".  Nothing affected the screen.  In the same way, the things that happen during the Waking, Dream, & Deep Dreamless Sleep do not affect you at all.  You remain your own Self.  Although people have all 3 States (Waking, Dream, Deep Dreamless Sleep), these do not affect them.  All these states come & go. The Self is not bothered, it has only 1 State.

“There is no Creation, no Destruction, no Bondage, no longing to be freed from Bondage, no striving for Liberation, nor anyone who has attained Liberation. Know that this to be Ultimate Truth.”
–  the “no creation” school of Gaudapada, Shankara, Ramana, Nome – Ajata Vada
for very succinct summary of the teaching & practice, see:  www.ajatavada.com/
Posted by jstiga at 11:32 AM