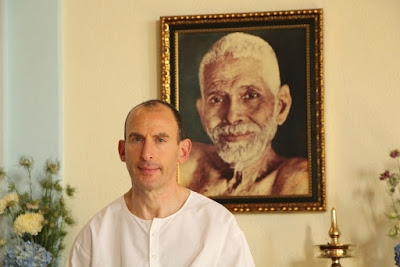 With Self-Inquiry to know our own true Existence, we will find that there is no room for an Ego–"I", let alone room for the fear of Death. What is it that can conquer Death ?  Only That which is deathless can conqueror the fear of Death. Thus is how the conquering of Death first can come about: no one wishes to cease to exist. This is because there is the intuition that Happiness is identical with Existence. If un–happiness were identical with Existence, everyone would want to go out of existence, but everyone wishes to remain without ceasing.  This is because there is this intuition that Existence is indeed Happiness.

The Body is composed of matter, the very same that is contained in the food it consumes. Why should one regard that as oneself ?  Before eating it, it is not regarded as oneself. After eating, food & the Body it builds are by Delusion, regarded as oneself provided one does not regurgitate it. After it passes along the system of digestion, it is certainly not regarded as oneself. Similar is it with the parts of the Body. They are regarded as oneself only so long as they are connected with the rest of the Body. The Mis-identification is thus arbitrary & delusively associated with proximity to the rest of the form of the Body. How therefore can Existence be equated with the Body ?  The Self is not momentary but is permanent without a moment's interruption. Its Existence does not cease even in the absence of perception. The Body is momentary. It endures but for one lifetime. It appears only in the moments of perception.  How therefore can Existence be equated with the body ?  The Self is non–objective & ever the Knower. The body is objective & always only the Known.  How therefore can the Self's Existence be equated with the Body ?

Reality is Pure Consciousness & remains when Ignorance is destroyed along with knowledge of objects.
The Self alone exists. In that real form of Brahman, which is abundant Self-awareness, there is not the least Ignorance.

Reality shines fully, without sorrow & without a Body, not only when the World is known but also when the World is not known.  This is your real Form, the radiance of Existence-Bliss, in the form of one Consciousness shining equally with–in & with–out, the Supreme & blissful Primal Reality.

“There is no Creation, no Destruction, no Bondage, no longing to be freed from Bondage, no striving for Liberation, nor anyone who has attained Liberation. Know that this to be Ultimate Truth.”
–  the “no creation” school of Gaudapada, Shankara, Ramana, Nome – Ajata Vada
for very succinct summary of the teaching & practice, see:  www.ajatavada.com/
Posted by jstiga at 11:22 AM