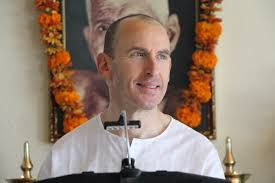 Master Nome before a photo of Sri Ramana


[The Teaching  of Non-Duality has been adapted from Master Nome, disciple of Sri Ramana Maharshi]

Once we note that we seem to be in the "sphere" of Illusion, we naturally want to be out of it.  Our True Nature is Immortal, but having been confused with what is mortal (the Body, etc.), we fear the end of that "mortal existence" & seem subject to mortality.  If our Pure Existence can be distinguished from that which is mortal part (the Body, etc,), the fear of Death will disappear entirely, once & forever. We will have abandoned the false identity with the notion Ego–"I".

Remain detached from the Body, its attributes, & its activities. Utilize the bodily form, while it is alive, as an instrument for selfless activity inspired by Wisdom, by the desire for Liberation, & by the immensity of Grace, acting with corresponding equanimity, purpose, & devotion. The bodily activities are used as an instrument that expresses the Divine. By contemplation on its wondrous workings, the Body may be viewed as a reminder of the supreme Consciousness by which it appears, as does appear the entire Universe. The emphasis is placed, not on the "reminder", but on that of which one is reminded.  Remain unmoved by pleasure & pain, motion & inactivity, birth & death. For invariable Bliss, one must know one's freedom from the Body & all bodily attributes.

“There is no Creation, no Destruction, no Bondage, no longing to be freed from Bondage, no striving for Liberation, nor anyone who has attained Liberation. Know that this to be Ultimate Truth.”
–  the “no creation” school of Gaudapada, Shankara, Ramana, Nome – Ajata Vada
for very succinct summary of the teaching & practice, see:  www.ajatavada.com/
Posted by jstiga at 10:40 AM