Essay outside of the NMT (No-Me Teaching) series 19 c 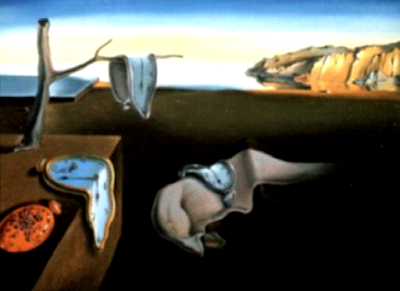 We next return form this 7-part “Time” diversion to continue Quantum Reality segments. More could be said about Metaphysical Time & certainly more details will later appear about the Science of Time, but for now we conclude at the Beginning, the Big Bang when Time itself evolves within the Big Bang & the succeeding Weinberg’s First 3 Minutes.
The initial Planck quantum of Time ~ ½ x 10–43 sec is truly infinitesimally short & indescribable. None of the 4 Fundamental Forces are distinguishable yet at this tiny Universe inflates & expands (not “explodes”), thus cooling off adiabatically like rising hot air does in our atmosphere. The initial Temperature dropping throughout this Earliest Planck “Epoch” can scarce be estimated but was likely to cool through undecillion 1036 degrees Kelvin (or essentially the same as Celsius at these high values).
There follows a Grand Unification “Epoch” (some “epoch”, lasting only an undecillionth of a sec 10–36) when the Fundamental Forces remain as in–distinguishable (“unified”) Gauge Forces (according to a GUT grand-unification theory; the previous state describable by some yet undetermined TOE theory of everything) except for Gravity with has not separated out as a separate weak, but long range Force. That earlier Planck “Epoch” is variously conjectured as Gravitational Singularity (like a mega-Black Hole) perhaps arising as a virtual Quantum Fluctuation from the Void, Vacuum & somehow escaping immediate return (with its corresponding balancing “opposite” remaining the Vacuum Energy, or as Dark Energy, or ???).
Like awesome phase transitions, the Gauge Forces will, one by one, start freezing out of the GUT as Temperature drops. In the succeeding Electro-weak Epoch from 10–36 to the relatively “ancient” 10–12 trillionth of a sec, when the Strong Nuclear Forces freezes out from the remaining, unified Electro-weak Forces (so the division so far is from all 4 – TOE to Gravity & GUT, & now to Gravity & Strong, leaving Electro-weak still in–distinguishable). Early within that Electro-weak Epoch, at 10–32 sec, true Cosmic Inflation begins. In about a decillionth of a sec 10–33 or so a the tiny pea-sized Universe expands by a factor of some 1080 (a number which happens to count all the particles in the currently known Universe).
[A mere sextillion of these constitutes a Googol & a mere sextillion Googols may estimate the odds that our Anthropically Fine-Tuned Universe is a random accident. Either there is some Consciousness running the show, or we are the 1 odd case among some 10120 universes (or maybe 10500) making up a hypothetical Multi-verse – the unprovable Materialist conjecture to explain the long odds.]
The next Quark Epoch from 10–12 to a long 10–6 millionth of a sec sees the Weak Nuclear Force freeze out to leave “ordinary” Electro-Magnetism. We find the Universe full of “Light” Photons (electro-magnetic bosons) & hot Quark– Gluon plasma containing Fermions (quarks & leptons, such as electrons & neutrinos & their anti-particles) & Gluons (gauge bosons for quark interactions). Still way too hot for Mesons or Baryons (Protons, Neutrons, …).
During the next Hadron Epoch from a 10–6 millionth of a sec to a full Second, the hadrons (including Baryons (Protons, Neutrons, …) freeze out. Well into this Epoch, at 2% of a sec, we can estimate a temperature “colder” than a trillion degrees & on down to tenth or hundredth of that by the end of this Epoch.
Between 1 & 10 sec, the Lepton Epoch sees most of the Hadrons & their anti-particles self-annihilate, & later most of the Leptons & their anti-particles self-annihilate, leaving the mostly Photon Universe of today. There would be about one Baryon (Proton or Neutron which freely interchange at these temperatures) per 1 Billion “Light” (strictly higher frequency EMR) Photons, & this ratio essentially continues. The “few” (percentage-wise) Hadrons & Leptons make up all the Matter of our Universe today (far less than Dark Matter & far, far less than Dark energy).
Only after the First 3 Minutes will Quarks gluon–together into stable Nuclei [¼ Helium, ¾ Hydrogen, with most larger nuclei to be made later within stars]. At 70K years, Photon & Matter [mostly cold, dark] densities equal, & at 377K years, Atoms begin to form, allow Transparency, that is: Photons to de-couple & stream freely through the Universe as they do today (when inflation has cooled the 10K degrees down to the Cosmic Background Micro-wave Radiation).

Calculus for Yogis, part 1
[In a manner somewhat similar to Coordinate Space analogies used here, "graphs" play heavily here, if only because some of the Mind works this way.]
The idea behind this "Calculus for Yogis" segment is to use a simplest introduction to Calculus as a ongoing Analogy for certain spiritual principles.  In dealing with Math at this very Intermediate level, it serves to warm up if we consider the idea of a "Variable", typically designated as " x".
To the uninitiated, this is sometimes called in popular speech, the unknown quantity. [I remember nuns in grade school complaining about then–commercial use of "X" in X–mas for Christ–mas, seemingly an "insult" to the Savior.  Actually, the "X" stood in for the Greek Chi, χ.  An even more obscure confusion took the capital of Eta, η, which as Н looked like the Roman alphabet "H".  Seeing this apparent "H" in the middle of the abbreviation "JES" for "Jesus" (ancient Greek script had only capitals), the less literate Medievals said "Jesus H. Christ".]
In any case, " x" sometimes is "unknown".  But more to the point, " x" is a "Variable", meaning that " x"  can be any Real Number.  "Variables" are symbols that can take on a range of numerical values.  Depending on the situation, it can later be "known", but the "Variable" nature, the symbolic, generic nature of " x" is the key point.
If we need another Variable, we often use  " y" why. And if another is needed, it may well be " z".  We often see this usage, not as fixed rules, but just as traditions.  By the same token, tradition has us using "n" when the variable is one of Integers, whole numbers. And if we need another Integer Variable, one, we might use "m".
Now in further exploring the traditional difference between " x" & " y", again not strict rule, we can consider "Dependent" & "Independent" Variables; "Intensive" & "Extensive" Variables.  The terms independent & extensive, & also dependent & intensive are used below in the following specific ways for  " x"  &  " y"  respectively.
independent  –  a measure of Time, Space. Angle. etc. that "roll on", often "linearly", unaffected by other influences.
extensive       –  a measure again, often as other than Time, Space. Angle. etc.  The extensive Variable doubles & so on when other influences 2x, & so on.  Twice as much Time may result in twice as much Mass appearing. for instance.
dependent     –  a measure of some result, changing with Time, Space. Angle. & that is affected by these & other influences.
intensive       –   a measure that does not double & so on when other influences 2x & so on.  Temperature of hot water will not double, & so on, with a 2x increase on the quantity of the same Temperature water.
Δ x  =  B – A   is typically the change in an independent, often extensive quantity.  The evolution, the transformation, of that aspect of the path or journey often gives direction, in terms of to & fro on a 2-D graph.           .          .                 .       .
A                B
Δ y  =  D – C    is typically the change in a dependent, often intensive quantity. Often, over a Duration or Time interval, or a traversing a Distance or Displacement, the change in a dependent, often intensive quantity (or some similar linear measure of ongoing change in perspective, such as angle, and so on).  This appears as ups & downs on a 2-D graph.
D    .
|
|
C   .

Δ y / Δ x   is the "slope", the "steepness" or "slant" of a rising (or descending) "curve" of y  vs.  x, even if it should happen to be a straight line.                                  /
/
/
By looking at that ratio called "Delta y over Delta x", the "rise over the run", we weigh the recent history or progress of  y  over the span of  x  considered.  Again, that span will be of Time or Distance or in most cases some other extensive quantity, be it Angle, and so on.
Putting the same ratio in terms of A, B, C, D, this slope becomes  (B  – A) / (D  – C). Here we can see a "minus" as giving the change in going from A to B, or the evolution or progress of  y as it went from A to B.
[For Analogy purposes: (B  – A) can be the "imagined" span in unreal Time or Space over which an unreal objective change is envisioned.  Then, (D  – C) represents that unreal objective change.]
The ratio, putting the change in   y  over the change in the extensive variable  x,  from C to D or D  – C, puts a scale, a calibration, to our measure of the change in  y.
When the differences in  y  &  x   become infinitesimally small, the capital Greek "D" or Delta, Δ  (for average Slope) is replaced by the simple lowercase Roman alphabet "dee" or "d" & the "ratio" of  d y / d x  is also called the "Derivative".
Like many terms in Calculus, including the term "calculus" itself, the "Derivative" comes to sound scary, perhaps inherently so.  But this is also due to the twinge of fear, in part due to the word, when used by early grade school teachers who 1st come to mention it.  Some of these teachers are afraid of what they take to be a topic daunting to themselves.  Imparting that fear, along with the strangeness of the word, complexity becomes associated with terms like "calculus".  The original word just means counting the little "stones", as in an abacus, or the beads upon the wire in a pool hall, or the rosary for a pious Catholic.  "Calculus" is just counting.
So it is with "Derivative", the technical limit of this slope of  Δ y / Δ x .  This is the limit where the tiny interval of the considered changes become infinitesimal, designated  d

"There is no Creation, no Destruction, no Bondage, no longing to be freed from Bondage, no striving for Liberation, nor anyone who has attained Liberation. Know that this to be Ultimate Truth."  –  the "no creation" , Shankara, Ramana,  – Ajata Vada
Posted by jstiga at 10:28 AM