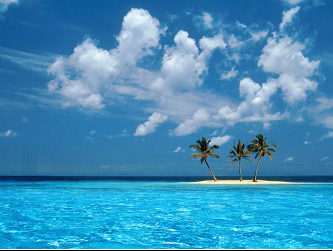 
Know that these countless things are pictures in a Dream & none is real apart from the beholder. Shun this phantom World of names & forms & dwell in the pure, blissful being of Awareness.
One forgets the Self & thinks the Body is oneself & goes through innumerable Births & in the end remembers & remains the Self.  Know this is only like awaking from a Dream wherein one has wandered all over the World.
Destroying through Discrimination the basic error that I am the Body, an object, & rejecting it & the World as mere mirages false, the Awareness that surviving shines alone as Being, That am I.
When one now deeming oneself the Mind & wandering lost amid phenomena, wakes up from this Dream-spectacle & remerges in the Self & stands as That, this is the inwardness of Yoga true.
The Universe out there appears when scanned.  But when not scanned, it disappears. Turning away from this, search keenly for the Self within the heart, & think no more of birth.
Seen through the eye of our true Being which is Awareness pure, Supreme, what we call “Birth” is but the folly of thinking that one is the Body which forms a poor part of this entirely false phenomenal World.
Until the Snake-illusion goes, its ground, the real Rope, will not be recognized.  Until the World of false phenomena disappears, the Self, its ground, will not shine clear.


The Waking-state is commonly held to consist of thinking & feeling in the presence of tangible objects. Tangible objects are perceived through the 5 organs of Sensory Perception.  These organs we shall call collectively the bodily Senses.

The Dream-state, from the standpoint of the Waking, consists only of thinking & feeling.  But the Dreamer has no idea that he is dreaming, for according to his experience, tangible objects are also perceived. Thus the Dream-state is definable in exactly the same terms as the Waking.

When we compare the 2 states, each being viewed from its own standpoint, no difference can be found.  A difference appears, however, when we consider Dreams from the standpoint of Waking, according to which Waking alone is a real experience.  On Waking, we know that the Dream-world, together with the Dream-Body whose Senses perceived it, were products of the Mind. The question then arises whether the Waking-man's thoughts & the Dreamer's whole experience are not equivalent.

Thinking is supposed to differ from Dreaming on several scores, notwithstanding our knowledge that both are mental.  First, Dreams are said to derive, & not to be distinct, from Waking experience.  If so, this would apply equally to the thoughts that occur in the Waking-state.

Second, some Dreams are said to derive from a latent store of impressions which contemporary Psychology calls the Subconscious Mind. Granting the existence of a Subconscious Mind, so do some thoughts.

Fourth, while thinking in the Waking-state may appear at times to be deliberate & at others involuntary, Dreaming, from the waiter's standpoint, must always appear to be involuntary. This is a confusion, for if the Dream-state is entered involuntarily, so is the Waking-state.  But in Dreaming as well as in Waking, we may seem to choose our thoughts.

Fifth, it is supposed that events occurring in Dreams would occupy less time than similar events if they occurred in Waking experience.  This is to equate the standard of Time in our Perception of tangible objects to that in our thinking about them when there.  From the standpoint of Consciousness, what is not now its Object does not now exist.  Subconscious Mind can only be regarded as a contradiction in terms.

As long as there is the notion of "I", there will be the conception of "this."  Between "I" & "this," all Illusion spreads out.  How do you determine "this", whatever "this" is ?  You determine "this" by the position of "I".  Know yourself as you are.  What you are is Invariable.  All of the time, there is the sense of Existence & the intuitive knowledge of it.  What, though, do you attribute to that Existence ? What is superimposed upon it ?  How is that Existence Misidentified & keeps changing ?  In Ignorance, one does not notice that Existence & so one takes the changeful Form to be the unchanging Reality.  True Self-Inquiry clears that up.  Without bringing any new attainment, or producing something, which would then decay & perish, Self-Inquiry reveals what is Real.
What is Real ever is, & what is unreal never is.  The great, deep Silence of the Maharshi, & in ancient times, of Dakshinamurti, is a revelation of just that — "the Reality ever is."  If we need to explain more: 'The unreal never is."  The Silence is indicative, in an overpowering way—overpowering because there is nothing other than it—that there is nothing than it & that there is just one solitary Kaivalyam [aloneness], just one Existence, just one Brahman, or the Real Self
Ideas that "take you out of Meditation" do not "come back", but rather you conjure them up maintain them. You can also take them [the "Meditation-derailing" ideas] down. You lend them their reality. Otherwise, not only would they be of no effect, but they would cease to exist for you.  Binding, delusive thoughts would not only not matter, they would cease to exist, if the Mis-identification, which prompted such bewildered ways of thinking, would cease to exist.
If you Mis-identify, you become accustomed to a certain pattern of thinking, a certain tendency, or Vasana [karmic residual Tendency]. If you dis-identify, having cut off the root, where will the rest of the vasana-plant be ?  If there is no seed, there is no sprout.  If you take away its birthplace, it [Vasana – karmic residual Tendency] will not grow.
What the Maharshi is talking about when he talks about the Pearl Diver who must Dive Deep, down to the root, in the Sea, is to go deep into your Self.  Find what you are Mis-identifying with, & Inquire to see if that is Who you really are.  When you are reading the scriptures, old texts, & sayings of the Maharshi—some source of deep Wisdom—your Mind is lifted out of all of that, is it not ?  Is it just a change of superficial thought or does something else occur ?
Something deeper than just a change of superficial thought occurs.  Look in & at the Self, looking as the Self.  So, you are looking to the Self, or as the Self or both. There is a depth regarding the nature of your Identity. Later, something [a Vasana – karmic residual Tendency] intervenes.  It is not given to you.  You conjure it up. It is not by accident. See what it is that you conjure up. Trace it to its root.  Dissolve the root by Knowledge. It is not merely your Body becoming active or going about your daily affairs that causes Ignorance.  However, the idea that you have daily affairs [& a Body] might be worthwhile questioning, because the "I" that has daily affairs & the "I" you are finding when you are reading Ribhu Gita or reading the Maharshi or reading some other Text or Scripture are not the same "I" are they?  Yet, there is only One of you.  You are not a plurality. Determine What you are.

"There is no Creation, no Destruction, no Bondage, no longing to be freed from Bondage, no striving for Liberation, nor anyone who has attained Liberation. Know that this to be Ultimate Truth."  –  the "no creation" , Shankara, Ramana,  – Ajata Vada
Posted by jstiga at 7:01 AM