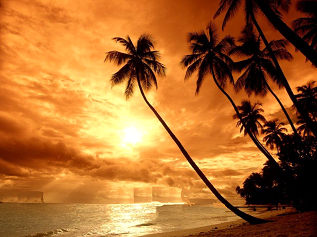 :Ignorance will not be eradicated except in those who, through the power of Self-Inquiry conducted assiduously within the heart, have attained the victorious absolute vision in which the whole panoply of manifestation is transcended, being seen as a mere Cinema show.

The infinite variety of false & treacherous modes of existence are merely brightly colored images appearing as if in a Mirror.  We must realize that the false & treacherous identification of the “I” with the Body is the seed from which these appearances arise to ensnare us, & we must reject it with disdain.

That which is spoken of as the Life of life itself is the true Life; That other "life" is merely the Body. That illusory knowledge mediated by the Senses is nothing but Delusion. The pure Consciousness that underlies it alone is true consciousness.

We think we live in a real, materially substantial World, & that our Minds & Bodies are real entities that move around in it. When the Self is seen & known, all these false ideas fade away & one is left with the Knowledge: Self alone exists.

There are Dream consequences for the bad acts committed in the Dream, & while you still take the Dream to be the reality, you will suffer the consequences of your bad behavior. Do no evil & have no hate. Have equanimity towards everything.

Your real state is the Self, & in that Self there is no Body & no Mind.


If it be true that objects as such are not perceived, then one's own Body as such, being an object, is not perceived.  One's Body is a notion, formed in the same manner as the notion of any other object. The relation between the perceiver's Body & foreign bodies entails the Sensations that gives rise to the notion of an Object. These are nothing more than the Sense's Sensing. And because the Senses cannot exist without the support of a Body, it follows that our notion of any foreign Body, whether animate or inanimate, depends upon the notion of our own Body.

Even to speak of its Sound, Color, or Feel is only a concession to a prejudice. For, in the actual experience, we are conscious simply of isolated Sensations. It is afterwards that we call them the attributes of an Object.

Moreover, it is our Body which provides the ultimate standard of size & situation [big, close, etc.]. We see that other people's bodies, like our own, are notions pertaining to the particular state of mental activity which is at present being experienced.

The same conclusion has been reached by an analysis of Sensory Perception.  For the notion of a foreign Body depends upon the Notion of our own Body, whether it be the Body of Waking or of Dreaming experience.  We shall now find that the experience we attribute to others is also a Notion, in so far as its objectivity is concerned.

Common Sense relies upon the testimony of other living beings, or of man-made adjuncts [media, etc.] to the Sensory faculty, in order to prove the independent "existence" of Objects.  It takes for granted, moreover, the independent existence of the living beings, or the mechanical devices, upon whose testimony it relies.  Against the commonsense view, in total opposition, stands the metaphysical, according to which the idea that objects exist independently of their being perceived, whether they be animate or inanimate, is illusory.

The Truth is that there is one Existence, pure unalloyed Being, which is Non-Dual. It is indivisible &  undifferentiated. If there is an absence of Knowledge regarding it, if one is ignorant of it, that one Self appears as if a multiplicity. Commencing with the notion, the barest assumption, of  "I"  as a separate Individual, all diversity spreads forth. This is not a real creation of diversity.  It is only an illusion due to lack of Knowledge of the Self,

In a verse that refers to the “Silence” of Dakshinamurti, the primordial Sage & Guru, the Maharshi, says, “The One Self alone exists eternally." That is the Truth, with no ignorance prevailing. That is what is realized in Self-Knowledge, or Self-Realization, as we call it. If we think in terms of multiplicity, or differentiation, all of such starts with the notion of "I".  In order to realize the Truth in your own practice on a path of Knowledge & thus experience the unalloyed Bliss & Peace of that one Self, what is necessary is to thoroughly inquire. If you thoroughly inquire to realize what you are, you will find that there is no separate Individuality, or Ego, & consequently, that there is no differentiated assortment of beings, but just one Self. How does one mark off the differences so that he can say, "I," "you," "he," "she," "it," & "another'' ? This is done only by mis-identification

The purpose of Satsang is for you to have direct experience & Knowledge, not only later when you meditate upon what you hear, but even now as I am speaking. So, listen & meditate. Meditatively consider for yourself how you mark off what you conceive as “yourself” & therefore, what you think of as some "other." As long as there is a self, one among many, there will be many surrounding that one. How do you mark off yourself ?  Is it by misidentifying yourself as a Body ?  If you did liberate yourself from the "I am the Body" notion, the misidentification with the Body, how would you distinguish between “yourself” & an "other" ?  How would the concept of an "other'' remain ?  Absent the concept of "other," how would the problems that arise between "your self' &  an "other" remain ?

How do you mark off yourself ?  Is it as a personality, which is but a conglomerate of various ideas, some of those ideas being memory, some of those ideas being present-moment thoughts, so-called personal thoughts & emotional thoughts ?  Is this one who knows all those thoughts that person ?  If you can discriminate in this manner, distinguishing clearly what the nature of the Self is, how will you differentiate between yourself & another ?

"There is no Creation, no Destruction, no Bondage, no longing to be freed from Bondage, no striving for Liberation, nor anyone who has attained Liberation. Know that this to be Ultimate Truth."  –  the "no creation" , Shankara, Ramana,  – Ajata Vada
Posted by jstiga at 7:35 AM