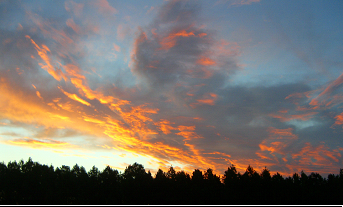 
The method of Self-Inquiry is to turn the outward going Mind back to its source the Heart, the Self, & fix it ever there, preventing the rising of the empty "I".

Inquiry is making the mind abide firm in the Self till the false Ego, Illusion's seed, has perished.

One who has wisely chosen the straight path of Self-Inquiry can never go astray; for like the bright, clear Sun, the self reveals itself to whoso turns towards it.

Un-deluded by what ever else may come & go, unwinking watch the Self, because the little fault of forgetting for one moment once true Being as pure Consciousness brings tremendous loss.

If you refrain from looking at this or that or any other object then by that overpowering look into Absolute Being, you become yourself the boundless Space of pure Consciousness which alone is real Being.

Unbroken Self-Consciousness is the true bright path of Devotion or Love.  Knowledge of our inherent Nature as indivisible Bliss Supreme wells up his Love.


In terms of the Senses, something no doubt has been apprehended.  But that something, in Reality, is not an Object.  That something transcends the Duality of Knower & Known.  Now the Abstraction of Sensible Qualities from a foreign Object implies that its Perceiver has, in the process, transcended the Sensible Qualities of his person.  And in the absence of Sensible Qualities both in the one & the other, it is not possible to find any difference between the Perceiver & the Object perceived.
Form stands for Sensible Qualities in general, Name for Intellectual Qualities, that is to say, for all that concerns the association of Ideas & the Notion of a specific Object [Particulars – Species, 3rd Skandha], or kind of Objects [Abstraction or Generalization, 4th Skandha].
We unwittingly make this Abstraction whenever we cease to be conscious of Objects, either in the interval between 2 thoughts, when a desire is fulfilled,  or in Deep Dreamless Sleep.  These considerations prove that appearances as such are nothing more than the Sense's own Sensing. The Nameless, Formless Being is another aspect of the Non-Dual Principle of Consciousness. Non-Duality only seems to become divided into a conscious Subject & its Object.
The Oneness of the Perceiver & the Perceived involves what is commonly called a Sense-datum & its corresponding Sense-organ, between which there is an immediate & inseparable connection.  It is in the nature of the Visual faculty to manifest Shapes & Colors, of the Auditory faculty to manifest Sounds; & so on.  What we take to be an object is the Visibility of Vision, the Audibility of Hearing & the rest.  But no separate Object as such has been cognized.
Now although we habitually take the opposite view, the idea that Sensations are caused by stimuli external to the Senses, that is an illusion: Imagine the sort of World it would be if he had, instead of 5, only 4 Senses, because for example, if he had absolutely no Sense of Touch:  It would certainly not be the same World whose real existence we now take for granted.
Our notion of Objects cannot therefore be separated from the acts of Hearing, Touching, Seeing, Tasting, & Smelling.  Furthermore, analysis of Waking & Dreaming shows that when these 2 states are looked at from the vantage-point of the Consciousness, which is common to both, they are indistinguishable.  The experience of each one is a mental product.  That being so, there is at no time any stimulus external to the Senses.
Between Brain, Sense-Organs & the Outer World, a characteristic phenomenon is that of Projection. Though Sensations are appreciated as the result of changes in the brain-cells, they are felt as if taking place more remotely. Touch is projected to the Skin surface, Taste to the Mouth, while we regard Sight & Sound as coming from the surroundings.  These are, as it were, conventional delusions established in infancy. For, in fact, our Sensations are the mere masks & symbols of Reality, which is filtered through our Sensory recording apparatus.


[responding to an issue of “questions”]

It is natural that questions arise. That questions may come from a state of unclarity is also natural. If there were clar­ity, the question would not rise to begin with. So, questions are asked out of lack of clarity, & answers are given, for the express purpose of gaining clarity. The purpose of the spiritual instruction & dialogue is to gain the necessary clarity. The answer will be at a level deeper than that at which the question was originally formulated. A question may arise about some activity or about some particular experience. The answer, though, will always be a clarification of one's Identity. That will remove the false stand assumed by the questioner. Thus, you find a final answer. Other answers may come along the way, but the final answer will always be one that resolves the Identity, the question of "Who am I ?", in a deeper manner than the level at which the question was originally formulated. The practice is one of Self-Inquiry.

What is being revealed is Being. The Maharshi said, “The only responsibility of a Guru is to reveal his own Existence.” This is what he has been doing all along: revealing just that one Existence. The method used here is Self-Inquiry (vichara atma), which is the very same as the Maharshi taught for all those years on Arunachala.

This Knowledge & this Self-Inquiry are nothing new. You can see the very same enunciated so eloquently by Adi Shankara so many centuries ago. Discrimination, Detachment, the Six Essentials, & the Desire for Liberation are the means. They are being employed all the time here, or they are assumed in the course of dialogue here.

You need to Discriminate. If you do not Discriminate, or Discern clearly, between what is True & what is false, between what is Real & what is not, between who you are & what you are not, you are going to be very unhappy. If you Discriminate, that becomes the Path of Knowledge. You should become
Detached from what you have Discriminated as not-Self.  Likewise is it for the development of Tranquility, Self-Control, Renunciation, Fortitude, Faith, & Deep, profound Meditation.[the 6 essentials recommended by Shankara].

"There is no Creation, no Destruction, no Bondage, no longing to be freed from Bondage, no striving for Liberation, nor anyone who has attained Liberation. Know that this to be Ultimate Truth."  –  the "no creation" , Shankara, Ramana,  – Ajata Vada
Posted by jstiga at 4:57 PM