Essay outside of the NMT (No-Me Teaching) series 24 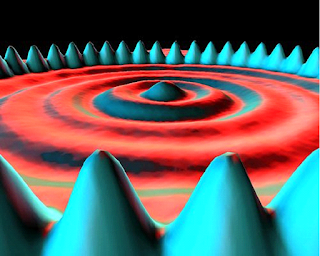 
In Non-duality, Meditation may be regarded as by the Self, for there is no other Knower, & upon the Self, since there is no Object of the Meditation. In Meditation upon Self-Knowledge one cannot stand apart from the Self to contemplate upon Self-Knowledge.
Knowing the Self is being the Self, & Being means Existence, one's own Existence.
No one denies one's Existence any more than one denies one's eyes, although one cannot see them.
The trouble lies with your desire to objectify the Self, in the same way as you objectify your eyes
when you place a mirror before them.
You have been so accustomed to objectivity that you have lost the knowledge of yourself, simply because the Self cannot be objectified.
Who is to know the Self ?   Can the insentient Body know it ?
All the time you speak & think of your "I", yet when questioned you deny knowledge of it.
You are the Self, yet you ask how to know the Self.

The many objective differences are not real but are mere superimpositions on Self, which is of nature of True Knowledge.
If the idea "l am the Body" is accepted, selves are multiple.
The state in which this "I am the Body" idea vanishes is the Self since in that state there are no other objects.
Since the Body itself does not exist in the natural outlook of the real Self, but only in the extroverted outlook of the Mind which is deluded by the power of Illusion, to call Self, the Space of Consciousness, dehi [the possessor of the Body, lit: cremation fuel] is wrong.
The World does not exist without the Body, the Body never exists without the Mind, the Mind never exists without Consciousness, & Consciousness never exists without Reality.
For the wise one who has known Self by diving within himself, there is nothing other than Self to be known.
Since the Ego which identifies the Body as "I" has perished, the wise one is the formless Existence-Consciousness.
The jnani knows he is the Self & that nothing, neither his Body nor anything else, exists but the Self.


What difference could presence or absence of a Body make ?

In 1927, at a gathering of physicists in , the Quantum Mechanics discoveries were hashed out, & a consensus emerged about how to interpret the experimental results. The consensus interpretation is called the interpretation, because it was primarily developed by Niels Bohr & his colleagues at his institute in . The scientific consensus that developed in 1927 did not make much sense to the general public in 1927, & it does not make much sense today. Nevertheless, it was & remains the standard "orthodox" interpretation of Quantum Mechanics in the scientific community, & it has withstood challenge after challenge from those whose main objection to it is that it does not make much sense.

"The most important fundamental laws & facts of Physical Science have all been discovered, & these are now so firmly established that the possibility of their ever being supplemented in consequence of new discoveries is exceedingly remote.”  1903, 1st American Nobel Prizewinner, Albert Michelson, whose Ether experiment with Morley toppled Newtonian Physics & inspired Einstein’s Special Relativity.

The older Cartesian Mind-Matter Naturalistic Dualism leads into a more careful & limited Interactionist Dualism. The anti–Realist viewpoint of Interactionist Dualism attempts to explain away what Cognitive philosopher David Chalmers calls the “Irreducibility of Consciousness” by exploiting certain properties of Quantum Mechanics such as Quantum Indeterminacy. Thereby a non-physical Consciousness might be responsible for filling the resultant causal gaps, determining which values some physical magnitudes might take within an apparently "probabilistic" distribution. More popular is a similar appeal to causal closure within Quantum Mechanics whereby "collapse of the wave-function" grants to Consciousness a vital causal role. “Consciousness-created” Reality describes this so-called Collapse occurring upon any act of Measurement or Observation. Such Interactionist Dualism avoids the Realist Epiphenomenalism ascribed to by most Scientists & Philosophers, including the relatively liberal-minded Chalmers.

A bit later, we will make our own valiant attempt to defend the “orthodox” Copenhagen II Convention of Quantum Mechanics, which was unpopular but accepted for ½ a century, & then unpopular & un-accepted for next ½ a century up until now & continuing so. But to face the now-majority “opposition” head-on, we do best to do more than address the thoughtlessly Realist nay-sayers who pretty much just say they “don’t like” the Quantum Idealism of the Copenhagen Convention. They then proceed to “impress” with the Mathematical robustness of their own Physicalist scheme, be it Bohmian mechanics, De-coherence, etc. The irony of this dive back into Mathematics when attacking Quantum Idealism is obvious.

The more thoughtful Philosopher of Science might refine the criticism by saying the basic mistake of Quantum Mechanics is a mistake of theory, a lack of precision in defining terms, such as the definition of a “point”, for indeed all of Physics prior to String Theory constructs the World out of points. Much like a TV or computer screen, a movie or painting, the mix of colors & shades we see are just so many points of pixels that are small enough so as to simulate a continuum to our eyes. But each quantum, each pixel, each “dot” or “period”, & certainly each clumsily defined Physics point is an actual discrete filled-in circle, often of 2-D on paper or on a screen. In a Hologram, or as imagined in Physics is such a Mathematical of “some dimension”. Periods, dots, & pixels of course have finite Area on the surface upon which they are represented. But even more abstract ordinarily-considered Mathematical points have Dimension. At minimum, a Mathematical Point on a Number Line has the same 1-D as does the Line itself. On a 2-D Graph, each Coordinate Point has 2-D. On a 3-D Graph, as in a Hologram, each Coordinate Point has 3-D. And so it goes for 4-D & higher-D. All these Mathematical points make up a discrete realm that only simulates a Continuum for sufficiently small, closely placed points.

Applied Mathematics, they say, represents Physical Reality, but it is not that Reality itself. The difference, they say, between non-infinitesimal, discrete Mathematical Points & the “real” 0-D physical points of the Continuum “falsely creates” Heisenberg’s Uncertainty Principle & Quantum Idealism by virtue of that mix-up, between the 2 kinds of Points.

Mathematical calculations upon Mathematical points, but not upon a physical points. The Mathematical points were created to allow the Math in the first place. The more thoughtful critics then claim that Quantum Mechanics forgets this & mistakes the Math for the Reality. [But the Quantum Idealists actually deny that Quantum probability wave is a Physical Reality. Yes is it Mathematically described, but exists in Aristotle’s Potentia or in Cosmic Mind [not puny little individual mind] – neither “physical” nor “mathematical”] . Critic & Idealist (unbeknownst to each other) agree that Math cannot be the Reality, but the Idealist denies that mind-created Physics or mind-created World can be either. Both say that Math represents the Physical Reality, but it is not logically equivalent to the Physical Reality.

Quantum Idealism, of course, somewhat parallels Bishop George Berkeley’s Idealism: “Our ideas are all we know & all we can know. Therefore our ideas are our Reality. The existence of material objects is therefore just conjecture. It is unproven & unprovable.”

Heisenberg’s Quantum probability made the Math the Reality. But math is an abstraction & therefore an idea. In this way, Quantum physicists are Idealists. The Realist critic re-iterates that the "field" of Physical Reality is always at least 1-D removed from any Mathematics. It must be by all the rules of logic & by the definition of "Math" of "field" & of "number". This means that the gap between Math & Physical Reality, they say, cannot be closed. But what proves the so-called Physical Reality, with 0-D Points or whatever ? The same critic would analogously refute , no in terms of Dimension, but in terms of “levels of abstraction”. Just as a  Mathematical Point is at least 1-D from Physical Reality, so too any Mathematical term or variable is at least one level of abstraction away from the Reality it represents, & any Idea must be at least one level of abstraction away from the thing it represents.

Akin to the critic of Quantum Mechanics, John Ruskin in 1856  refuted Berkeley principle that was later to be called qualia, by asserting that: "the color blue does not mean the sensation caused by a flower on the human eye; but it means the power of producing that sensation; & this power is always there, in the thing, whether we are there to experience it or not, & would remain there though there were not left a man on the face of the earth." That pre-Lockean confusion between primary & secondary Sense characteristics, (at least) lies a the heart of our later answer to these Quantum Mechanics critics.

First off, we attend to one of the various topics used in introducing Derivatives, topics that we have omitted, or in this case put off so far, for the sake of simplicity.

Please know that the Rule for taking the Derivative of that Composition is called the Chain Rule.  In terms of just the differentials  d y,  d x,  d t , it looks like they could be canceled & the expression below could be proven by simple canceling of terms.  That is a useful way of remembering how it works, but it doesn't quite work that simply. That aside the Chain Rule is:

Then if we take the Time Derivative of the product  xy  it turns out like this:

which it should when we consider (xy) to be a fuction of  x  &  y namely "multiplication" of the two.

The Integral pattern of is more clearly a "change of Variable" from:   x  to   y .

Corresponding to Integral expression is the Fourier Series in terms of Sums:

The transform, like the Fourier transform transforms a expression in ordinary Variables to one in a Frequency or "imaginary"–Frequency–type Variable.

To the Integral expression there is no corresponding is the "Laplace Series" in terms of Sums.


[The above themes & 1600 pages more are freely available as perused or downloaded PDF’s, the sole occupants of a Public Microsoft Skydrive “Public Folder” accessible through: