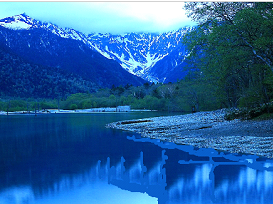 (18)
Hence, even if, for the non-inquiring fools,
The Undivided, perfectly full Brahman appears
As of the Elements and other variety of things,
For the Conquerors, who have inquired completely,
All this appearance, which seems to be differences,
Is only the partless, undivided Supreme Brahman.
Noble Sage! there is not an iota of doubt about this.
Is there any doubt in what the Lord has told me ?


As the one undivided Essence.


The substratum upon which the false idea of the Mind has been superimposed is the Self.  When you see the Mind, the Self, the underlying substratum, is not seen.  It is hidden by a false but persistent idea. And, conversely, when the Self is seen there is no Mind.

This habit (believing that I am a Body & a particular Person) has become very strong because you have reinforced & strengthened it over many lifetimes. This will go if you meditate on your real Self. The habit will melt away, like ice becoming water.

The Mind only gets dissolved in the Self by constant practice. At that moment the "I am the Body" idea disappears, just as Darkness disappears when the Sun rises.

Your most important objective must be realizing the Self.  If you have not done this, you will spend your time in Ignorance & Illusion.


Why should God, which may be supposed to want nothing, should have wished a Universe into being ? Rather than toy with these insoluble problems to no purpose, we note that all questions regarding Origins are illogical & absurd.  Cosmogony & Evolution, from various standpoints, consider the question of Origins.

Bertrand Russell, writing about the philosophy of Berkeley, remarks that "although Berkeley is right in saying that the events we know immediately are mental, it is highly probable that he is wrong as to the events we infer in places where there are no living bodies."  Lord Russell allows such a probability because Light & Sound take time to travel from their sources to the perceiver, & one must suppose that something is happening along the route by which they travel. What is happening along the route is presumably not "mental", for, as we have seen, "mental" events are those that have peculiar information effects which are connected with living tissue."

We are unable to see any difference between "the events we know immediately" & those "we infer in places where there are no living bodies."  For in postulating events we do not or cannot actually perceive, we inevitably visualize mental images which therefore we know immediately."  Even if vaguely, as though they were physically before us, we grant the dualism of Mind & matter which Russell has elsewhere disproved.

Again from Bertrand Russell: "As regards the World in general, both physical & mental, everything that we know of its intrinsic character is derived from the mental side, & almost everything that we know of its causal laws is derived from the physical side. But from the standpoint of philosophy, the distinction between physical & mental is superficial & unreal."
Some more selected verses from the Ramana Maharshi disciple Master Nome:


Let us assume that you are observing your own state of Mind, be it a particular thought, a mood, or mode.  When you have the recognition that this is not the highest way to be, you are already beginning to step out of it.  Proceed further.  Recognize that this tendency, Suffering, or Ignorance is not caused by external circumstances.  This is self-conjured.  With this recognition, you know that this is your own imagination or hallucination.  This is your idea.  It is not being caused by something else.  You are the one conjuring up this Ignorance for yourself, & it is not due to anyone else.  Thus, you are very much free to set yourself entirely free.  Then, there is the Realization that not only is Ignorance not your Self but it is something objectively displayed before you.  Furthermore, that objective display is now fully in the domain of your own responsibility.

The benefit of taking responsibility for one's own Delusion is that one is then set free from it.  As long as an "other" is supposed to be the cause of the Superimposition or the Ignorance, how will there be Liberation ?  That "other" could sneak up at any time & bind you!  If one knows within himself that he himself imagines his own Bondage, & that he himself, liberates himself, nothing external is seen to be the cause of suffering, bondage, unhappiness.  Taking that responsibility, you are set free, because you can change your Mind.  Deeper still, you can change in a spiritual sense so that you no longer misidentify with the Mind.  You can destroy the particular thought forms, & you can transcend the Mind entirely. Once you see that it is your own ideas, then the Inquiry, "For whom are these ideas ?  Are they true ?  What is the Reality ?" starts to make very good sense.

"There is no Creation, no Destruction, no Bondage, no longing to be freed from Bondage, no striving for Liberation, nor anyone who has attained Liberation. Know that this to be Ultimate Truth."  –  the "no creation" , Shankara, Ramana,  – Ajata Vada
Posted by jstiga at 8:16 AM