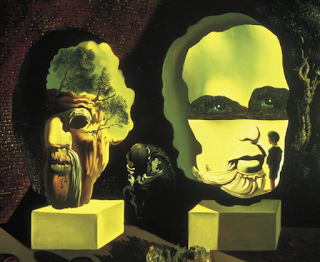 The Dream analogy is similar to Drishti-Srishti Vada, in that the seen Dream–World is united with & arises from the Seer.  Not entirely Non-Dual, Drishti-Srishti Vada, "simultaneous"–creation whereby the Seen, the World is united with & arises from the Seer, the Self, is a "working hypothesis" that can initially help one to see the World as an unreal projection of the Mind. When the World thus loses its attraction, this facilitates Self-Inquiry.  A similar term is Yugapat-Srishti Jada “instantaneous”–creation, with a moment by moment version espoused by some Buddhists.

for very succinct summary of the teaching & practice, see:  www.ajatavada.com/
Posted by jstiga at 5:48 AM