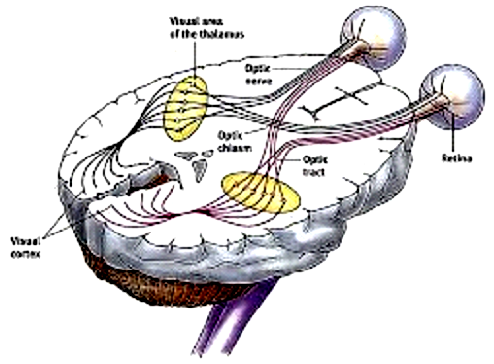 Also by reason of the Checklist points enumerated below, the Self never connects with, never really touches the Senses.

Comparing & contrasting the Self & the Senses (a partial Checklist):

(1) Multiplicity
a) The Self is singular & indivisible Existence.

b) The Senses are multiple & divided.

(2) Objectivity
a) The Self is non-objective, ever the Knower, of the nature of Existence–Consciousness.

b) The Senses are objective, the Known, just as the Sense objects are.

(3) Change & Permanence
a) The Self is changeless, continuous, permanent Existence..

b) The Senses are changeful, discontinuous, & impermanent.  The Senses are lost, dulled, or altered in illness, old age, & death.  The Senses change during one's Lifetime, from infancy until the death of the body.  The Senses are changing all the time, transforming into dull & acute states, subject as they are to the 3 gunas – the qualities of Tamas (inertia), Rajas (agitation), & Sattva (~ knowledge).  Each Sense takes a turn being dominant in fades due to a change of the Sense organ, the mental attention, & similar factors.

(4) the 3 States
a) The Self, Existence is always wholly Present, in Waking, Dream. & Deep Dreamless Sleep.

b) The Senses appear only in the .  With each State of they change (Waking, Dream-senses. Deep Dreamless Sleep).  Upon the Death of the Body, which is not the Self, the Senses are lost entirely.

b) Rarely are all the 5 Senses active, or experienced, simultaneously.  The Senses are just a momentary function.  The Senses are determined by conditions such as the condition of the Sense organ, & the environment.  As if a split in Consciousness – there appears separately the Object & the Sense instrument used to know the Object.  This experience & the mental attention given to or removed from the Senses is dis-continuous.  From a higher view, in one in the One Mind, all 3 changing factors [object, sense-instrument, attention] appear to be determining the 5 sense experiences.

The Senses cannot be considered to be the Self.

for very succinct summary of the teaching & practice, see:  www.ajatavada.com/
Posted by jstiga at 10:55 AM