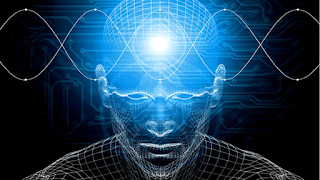 In the State of there is an absence of Waking & Dreaming thoughts & its content is, therefore, no World, no Body, no Senses, no ideas, no memories, & no "person" existing in the .

Deep Dreamless Sleep is characterized by the presence of the Cause of the absence of the Effect.  Therefore, it may be said that the un-manifests seeds of, or potential for Ignorance is present but not the effects of such Ignorance.  In Deep Dreamless Sleep there is only the non-Perception of Reality while the projection or hallucination of multiplicity & form is not there in Deep Dreamless Sleep. The Self, Existence–Consciousness, is free from both Cause & Effect. In Self-Knowledge neither the Veiling of Reality nor the Illusion of Multiplicity, neither the non-perception of real Existence nor the mis-perception of Existence is present.  The Self is Itself & knows Itself as it is.

Existence–Consciousness comes from Deep Dreamless Sleep. From Deep Dreamless Sleep comes Dream, from Dream comes Waking.  Each succeeding State occurs in the preceding one, (as in Shankara's Coin Analogy).  All occurs within Existence–Consciousness, & that is what one truly is. So it is better to say that the States, & the Worlds in the States, appear or in oneself rather than that one is in those States.

Being beyond the States, the Self is called "the 4th" (Turiya), yet it is only One & it is the in its own State forever.  The 3 states are seen as 3 only so long as Consciousness is not known as it is.  As Dream is to Deep Dreamless Sleep, emerging from within it, "forming it" yet not really so, for it is within the Formless, so too the is to Dream, a "the 4th" (Turiya) which is actually Pure Consciousness (Turiyatita – beyond the 4th).

for very succinct summary of the teaching & practice, see:  www.ajatavada.com/
Posted by jstiga at 9:53 AM