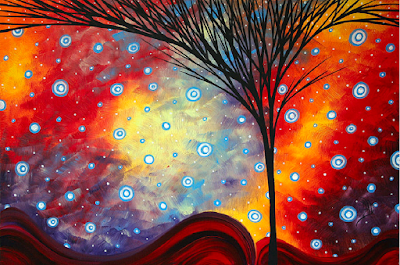 The Truth regarding the Self is that it is of the nature of Being-Consciousness-Bliss, & there is nothing other than the Self.  The Self is 1-with/out-a-2nd, without anything other.  In the Ribhu Gita, experience is described as composed of 5 parts: Being, Consciousness, Bliss, Name & Form. The same Gita says that the first 3 pertain to Reality, & the last 2 pertain to utter Illusion.  The Reality is Being-Consciousness ­ Bliss, while that which is Illusion is Name & Form.

Illusion signifies something actually nonexistent, something that is not.

What is meant by Name & Form ?  Form refers to everything perceived through the Senses. Name refers to all that is Formulated in ideas, anything of a mental character.
To those who are wisely meditating & thus recognizing that the World exists only in the Mind & nowhere else, we often say that the Truth is Formless.  This statement pertains to both Name & Form.  Everything perceivable & conceivable is not the Self & so such is not the actual Truth.

Being-Consciousness-Bliss is said to he Truth.  Being is non-objective.  It has no Form, is qualityless & attributeless, & That which ever is.  The Self, Being is Consciousness but not mere thought-Form & not mere sensation.  The Self is Bliss but not a mere mode of Mind or emotion, not something that depends on an outer cause or set of conditions, & not something that happens in Time. The Self is Bliss that is that is simultaneous & identical with Being, which the ever-present Consciousness.

In the book, Who am I ?, Ramana Maharshi points out this fact regarding the Self. At the commencement of the text, alter describing the negation of every kind of mis-identification — starting with the Body, including Prana or Life Energy, & proceeding to the Mind & all else — he says, "The Awareness that remains is of the nature of Being-Consciousness-Bliss."  That is, it is not individualized, it is not embodied, & it is not of Name & Form.  That Awareness is the Formless, attributeless, eternal Truth, & that is the real nature of the Self, which is who you are. It is this that you experience if you deeply Inquire within yourself, "Who am I ?"

The Upanishads. also speak of the Self as Sat-Chit­Ananda, Being-Consciousness-Bliss. The same Upanishads also refer to it as Truth-Knowledge-Infinity [Satyam Jnanam Anantam – both comparable to Satyam Shiva Sundarum, the True, the Good, the Beautiful].

Truth-Knowledge-Infinity. Truth is what is, & Truth is something that always is. To find the Truth, look to that which is ever existent, which is something without Birth or Death, Creation or Destruction.  When you Inquire within yourself to know Truth, you are looking for that which actually is.  Truth, or Reality, is that which is & which is ever-existent & which must be changelessly so. I f it is not ever-existent, it would be true at one time & false at another.  And Truth cannot be false at any time.  What Truth is, always is.  If it would change in the least degree, it would be a "truth" that forms admixtures with what is false.  If though, what you find is True, it never mixes with anything else, because of its invariable nature & because there is nothing else for it to mix with, for the Real is, & the unreal is not. The Real will not mix with the unreal.  If you apply this Knowledge to yourself in searching for the actual experiential Realization of the Truth within you, you will understand what is meant by "1-w/o-a-2nd," "Non –  Duality," & "there has never been anything else."  You will understand why the ancients said, "Brahman alone is." Brahman means vast Absolute Truth. You will understand why the ancients said "All this is only Brahman," "There is nothing but Brahman" & so forth.
Truth-Knowledge-Infinity. The 1st term is Truth, & the 2nd is Knowledge.  It is a basic, spiritual fact, which can he discerned by anyone who is introspective, that Ignorance alone is the cause of Bondage & its consequent Suffering.

for very succinct summary of the teaching & practice, see:  www.ajatavada.com/
Posted by jstiga at 5:14 PM