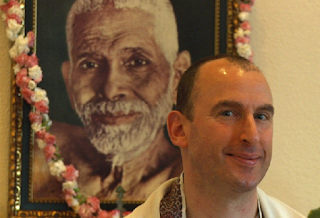 Difference, & change belong to the Senses & the Mind. The Self is undivided & without modifications.  Whatever is subject to change is limited.  The Self is limitless.  Knowledge through the Senses & the Mind changes & ceases.  Real Knowledge of the Self is ceaseless & never other than Being itself.  This Knowledge is as limitless & invariable as Being itself.  Just as all other thoughts are merely objective Perceptions, so is the Ego, which is not the Self & not a possession or attribute of the Self.  One should discriminate what is the Body, the Senses, the Mind, or "I" notion, or the aggregate of such, & inquire, “Who am I ?”.

One should give up the Identity that appears in the of Mind & also the belief of reality in the itself.  Likewise, one should not identify with what is of the , in which the Mind functions in a similar objective fashion.  One must know himself as beyond that which is of Deep Sleep, which is a state of Causal Merger.  The Self is the Witness of all states, is pure Consciousness, & is not an object of knowledge.  It is the unknown knower.  Though Consciousness cannot be known as an object, it, being formless & without duality, Consciousness can never be made distant from oneself.  Therefore, the Self, of the nature of Consciousness, is always known as one’s Own Nature. Consciousness is self-effulgent & does not require any other knowledge to know itself other than that which is its Own Nature, just as a light does not need another light in order to be seen, but is seen because of its own light.

The Self is the only knower, & nothing else is so.  It never comes into existence, for it eternally exists, & is without cause & effect.  The Self & Self-Knowledge are not effects of anything.  Just as the manifested & the un-manifested are 2 states superimposed upon the Self so, too, are Bondage & Liberation.  As there is no day or night for the Sun itself so there is neither Knowledge nor Ignorance for the Self.  Realizing the Self as having no connection with anything ever, one is himself the Truth of the Unborn, the Truth of No-creation, & is never born again & is never in Illusion again.

If one is immersed in Samsara, the repetitive cycle of Illusion, Births & Deaths, filled with Suffering, then the way to liberate himself is by Knowledge. Liberation, which is the goal of spiritual practice, is one’s own if, inquiring to know the Self, he discards all notions of “me” & “mine,” attains complete certitude in the Space-like nature of Reality, & abides devoid of physical & mental forms & the assumption of an Ego-entity.

If the Self would change states, such as states of Ignorance & Knowledge, of Bondage & Liberation, it would be destructible, & Liberation, itself, would be artificial or unreal.  Liberation is not a change of state from one into another.  It is  not reasonable to imagine a separation & union in relation to the Self, for both would be transitory.  The transient cannot be attributed to the Eternal, just as the unreal cannot be attributed to the Real, or the dual to the Non-Dual.  As there truly can be neither union nor separation, Liberation cannot consist of the Individual entering into Brahman or Brahman coming to the Individual.

The True Nature of the Self is never destroyed, is changeless, is uncaused, & cannot be obtained or lost.  The new appearance or coming into being of any state would be the effect of a precedent cause &, thus, changeful, transitory, & not self-existent; such cannot be permanent Liberation.  Self-Knowledge alone is Liberation. Knowing the Self to be oneself is the greatest attainment.  To wrongly assume the non-Self to be the Self is ignorance.  The removal of the superimposed mis-conceptions, of what the Self is alone, constitutes the path to Liberation.  No other view is reasonable, as such always involves some dualism, some belief in an existent Individual experiencer & a self-existent objective thing, & the conception that the Reality becomes other than what it is & the unreal actually comes to be.

Liberation cannot be a change of condition, because such involves mutability & thus destructibility, parts or divisions, & a change in nature.  Any belief that superimposition occurs on non-existence, that Illusion can actually create itself or that there is no Absolute Self should be abandoned because the existence of Being, itself, is irrefutable, & it is not reasonable that something could come from nothing. Superimposition occurs on some real thing, & there is the one who knows this Ignorance. It is Ignorance of what, & for who is it ?  If one so inquires, one finds that Being is, Consciousness is.