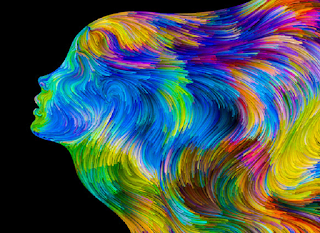 The 3 states [Waking, Dream, Deep Dreamless Sleep] are not consistently present.  The 3 States are passing appearances.  There are no aspects or phases of homogeneous Consciousness, which is partless.  As it is Existence–Consciousness, the self passes unaffected through the 3 States, unmoved by the presence or absence of thoughts in any of their permutations.  Yet how can the Self being Infinite, pass through anything else ?  The 3 States revolve in the Self, not the Self in them.  Yet how can there be anything but the Self & that undifferentiated Self ?  The Self is Infinite, detached, unaffected, the Reality devoid of mis-perception & non-perception, with no Cause & having no Effect.  In final Truth, there are no 3 states, & no Mind, & the Self is neither a Cause nor an Experiencer.

Though each thought may be regarded as affecting only other thoughts, for the Self is on as ever the unaffected Silent Witness of all of them, each thought actually has nothing that connects it to another thought.  All thoughts a supported by Consciousness alone.

Thought has no knowing power.  A thought cannot know itself, nor can it know another thought.  No thought is self–existent.  Each thought depends completely on Consciousness & is never known or experienced apart from Consciousness.  It appears & disappears in Consciousness alone.  So thought is just Consciousness, viewed as such.  Thought is said to be a "mode" (vritti), a modification, or form of Consciousness.  Consciousness itself is ever is forever Formless, unmodified, & has no modes, for it is changeless & Eternal.  How can there be a Form of the Formless, or modification of the changeless ?  Or how can there be a mode for the Birthless & Eternal ?  There thought has no real Existence.  Thought is like a snake imagined in a rope, or water of a Mirage.

for very succinct summary of the teaching & practice, see:  www.ajatavada.com/
Posted by jstiga at 8:00 AM