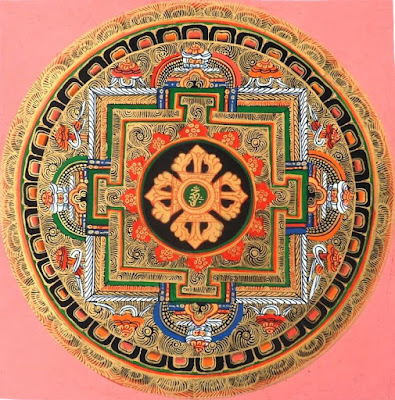 Spiritual instruction should not be interpreted so as to say that the Ego is really Born or that the Self actually gave birth to it.  The Ego cannot be self-produced.  To imagine so would be to suppose its pre-existence, which is absurd & which would lead to the consequent question as to what caused that pre-existent Ego ?

This in turn would lead either to the Delusion regarding the Effects causing the Cause or modification in the eternally common, changeless Self, which possibilities have already been negated by Self-Inquiry.  Or else it would lead to an infinite regression.  But the Self alone is Infinite, & Causality is not Real.  One cannot actually recall when this Ego, the root of maya, began, was created or was born, though there is knowledge of Perpetual Existence, which is of the Self alone. Never was there a time when you are not, & never will there be a time when you will cease to be.  [Similar to Bhagavad-Gita quote]

Thus the Self is ever the Un-born – neither coming from another State or thing, nor giving birth to any – & Ego is also "unborn" in the sense that it never comes to be.  This may be regarded as the final significance of Ramana Maharshi's Self-Inquiry as to: "Whence am I ?"  This is graciously given to show the method of tracing inwardly from the Identity, where the Identity of "I" derives, as well as: "Who am I ?"

How can there be the Ego's Effect (Delusion), as the supposed Cause itself is never come to be ?  The Ego is an assumption. Who assumes this assumption ?  No one.  Who knows the Knowledge of the Self ?  The Ego I cannot know the Self, since the Self alone is capable of knowing.  The "I" is inert, & the "known" is a mere notion, a vacuous imagining, an assumption that is non-existent. There is no Ego to be ignorant or to be bound, to attempt to know the Self, or to return to It, or to unite with It.  The Self is what you are, & It is innately Ego-less.  Let this is Ego-less Knowledge of the Self abide.  Let the Knowledge of the Non-Dual, In-divisible Nature of the Self, the only true "I", in which there is never an individual–"I"  – that true "I" alone exists.

for very succinct summary of the teaching & practice, see:  www.ajatavada.com/
Posted by jstiga at 12:17 PM