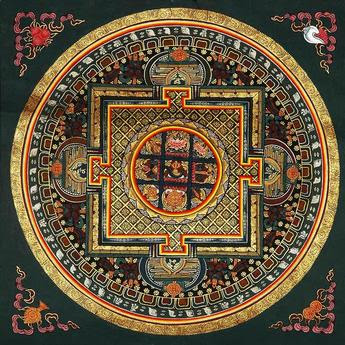 Samadhi is always a state of absorption, a merging or dissolution of one's Identity. In some descriptions, samadhi is classified in various ways, yet, in samadhi itself, no such classifications or the means to conceive of such exist. If the state is prompted by or is inclusive of some differentiation, such as Meditation on the whole universe being pervaded by That or the Self as the Universal Witness, it is savikalpa, that is, "with differentiation."  If it is prompted by Meditation of the nature of Non–Differentiation, such as the Self & the Absolute are identical or the Self alone is & there has never come to be any objective thing whatsoever, & is an undifferentiated state, it is known as nirvikalpa, "without differentiation."  Such is characterized by an absence of illusory, objective perception, inclusive of time, space, & matter. It is bodiless & without mental activity. If the absorption is so complete as to eliminate the possibility of an alternative, a samadhi of Knowledge of the Reality in which there is no such thing as an existent un-reality, the natural state of the Self as it innately is without any further effort to be applied or anyone to apply it, it is, as Ramana Maharshi stated, Sahaja Samadhi, which is the Natural, Innate, effortless State. This is Self-Realization. It could be said that savikalpa retains a unity of knower & known, the meditator at one with the ideal or object of nirvikalpa  is a dissolution of the knower & the known; sahaja  is "no creation" in which there are no such things as knower, knowing & known. The experience of all these is available for those who one-pointedly focus on the Self-Inquiry to know the Self, though the sahaja state is alone the final goal, a goal which is found to be at no distance but to be one's very Being by those who realize the Self.

Though the Absolute Self is not dependent upon any condition or state of Mind, being ever transcendent of all modes of Mind & the Mind itself, & though Self-Knowledge is thought-transcendent, or free from thought, it is extremely rare to find anyone who has realized this who has not engaged in deep, profound Meditation.  Meditation should be understood as the invaluable opportunity to be awake to Reality, the chance to be with full focus on the Truth of the Self, the auspicious moment to dismantle & destroy the illusions of the Ego, & the time to turn the Mind from its own delusive creations to the clarity of understanding what is true.  It is the opportunity to be with oneself, not in relation, response, or reaction to anything else, but to see clearly what one's Self actually is, free of every supposition.  In the profound Knowledge that thus shines, one finds that there is truly no alternative state, & the Meditation is found to be perpetual. Meditation, as Self-Inquiry, should be practiced by the aspirant for Liberation until there is no possibility of ever being bound again & the Truth of the Self has been conclusively realized.

There are innumerable forms of Meditation. Meditation that does not have Self–Knowledge as a clear orientation will not result in Self-Knowledge. If one meditates upon worldly interactions, one may improve those transient interactions, in a changeful universe that is akin to last night's dream, to a certain extent.  If one meditates upon sensations, gross or subtle, one will come to dwell temporarily in those transient sensations. If one meditates upon thought or in a thought­dependent manner, one will arrive at a corresponding mental state, which certainly cannot be Eternal.  If one meditates by Self-Inquiry, the result is Self-Knowledge, or Self-Realization. That is the Non-Dual Self, upon realizing which there remains nothing more to realize, the freedom of which leaves no trace of a possibility of bondage, the perfect fullness of which leaves no dissatisfaction whatsoever, the time­lessness of which cannot be measured or terminated, the formlessness of which has no comparison or contrast, & the Reality, or Existence, of which leaves no other "existence".

The prime way of developing Meditation ability, assuming one has access to Non-Dual meditate, is to meditate. Even if there is no such access, if one ardently meditates with sincerity & the intense desire to realize, the Self-Inquiry will make itself known within, & if, one perseveres in the Self-Inquiry, the Self, which is one's true nature, will be realized.

for very succinct summary of the teaching & practice, see:  www.ajatavada.com/
Posted by jstiga at 3:51 PM