Self beyond Thought part I: 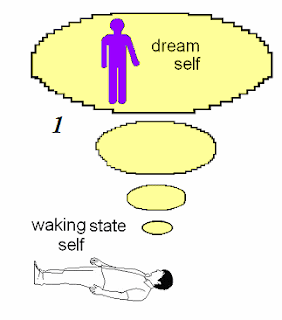 Thoughts & Feelings are of the Mind, not the Self – “I”, neither Body, nor Mind, Doer nor Enjoyer, I have no Birth, growth, decay, or Death, but is instead Consciousness without end.

The “I” rises before & after Thought & Feeling, Consciousness-without-an-Object & without Subject. This is the Bliss in Deep Dreamless Sleep & when desire for an object is fulfilled.  The World is illumined by the light of the Self, the light in perception of the World.  When asked "do you exist?", one experiences Consciousness- without- an- object.  Consciousness can never truly be an object to "have" or be a predicate object of "to be."

“I” is the knower, never known & all else but this Consciousness is never known. Seeing is inseparable from Form, bootstrapping each other by Dependent Origination, like "Heads" & "Tails" on the same coin. Likewise for Hearing & Sound; Touch & Feeling; Olfaction & Smell; Taste & Flavor; Mind & Thought; Sense & Object; Mind & "Subtle" Object. Consciousness alone knows, knows itself as the Absolute Reality.

Knowing the Dream does not prove reality of the Dream nor does knowing prove the reality of anything else Known.  Consciousness alone is proven, Peaceful, true Holy, Changeless, & Free.  The Object of Perception, in turn, is Existence itself, one with Consciousness, the Self, “I”.  Ignorant people need no special practice or remembrance to maintain their identities as a Body.

[But from now on, they will be different & still usually daily.]
Posted by jstiga at 8:51 AM