Essay outside of the NMT (No-Me Teaching) series 15 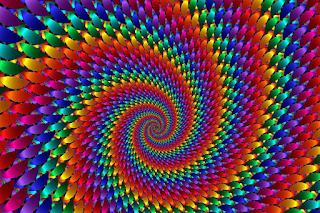 Classical Physics aspired to be strongly objective, assuming that it could be interpreted as a description of mind-independent reality. But right from the start, when Galileo began to quantify “speed” in simple terms like (∆x/∆t), Western Science took a big step out of a Sense–Perceived World onto a page of Mathematical formulas. Instead of mind-independent reality, the focus, all the way through SR [special relativity], GR [general relativity], QM [quantum mechanics], QFT [quantum field theory], QED [quantum electro-dynamics], QG [quantum gravity] & String Theory shifted to a mind-created reality of Mathematical models. But only Quantum Mechanics, especially in the standard Copenhagen II Convention admitted explicitly to Consciousness-created Quantum Reality. Even so Quantum Mechanics claimed to be weakly objective in that “real” phenomena (if not real entities) were inter-subjectively valid, (shared experiences of many observers), but still referred to operations of the Mind that participated in an observed phenomenon or measurement. Delayed-Choice Double Slit, Quantum Erasure, & various Bell’s Theorem – related experiments may occupy us another day, but suffice it to say for now, that such as these contradict any strongly objective descriptor for Quantum Mechanics.

What Quantum Mechanics did retain was the “Gold Standard” of Science Models, the ability to Predict previously unobserved or unmeasured phenomena. But conventional Scientific Realism remained denied by Quantum Mechanics, so that Hidden-Variable, Many-Worlds, Decoherence, & many other Realist alternative formulations have been adhered to now by a majority of leading Physicists – though not justifiably so. These Realists cling with strong Metaphysical bias for Realism that smacks of pseudo-religious fervor. Similarly, the Multi-Verse is fantastically held up as denial of any Strong Anthropic Principle explanation of the extreme Fine Tuning of our Universe. These Realist movements ceased being Science & have long become ideological, pseudo-political, pseudo-religious, metaphysical bastions of intolerance of any alternatives or opposition. Ad hominem put-downs of nay-sayers, non-funding, non-tenuring, non-hiring freeze-outs coral even Instrumenalist Anti-Realism, not to mention Quantum Idealism into the same academic prison-camp reserved for Young-Earth Creationists, Astrologists, Para-Psychologists, & so on.

The Scientific Realist swears to the objective reality of a RWOT real-world-out-there & even their invisible invented– entities like Electrons, Quarks, Strings, Branes, & so on. The Quantum Idealist, for one, established that such a Realist proposition is unprovable. At the same time all admit that the fact that a proposition can not be proven is not a proof that it is wrong.

Lines of force, action at a distance, various fields, & even “inertia” can neither be directly experienced or proven. More significantly, alternate interpretations always remain unexamined, even for Quantum Mechanics where dozens of interpretations have already been studied. Science, as we know it, amounts to (mathematically synthesized) relations between observed phenomena. Predictive & Prescriptive principles, of themselves, are not strictly objective.

In fact, Immanuel Kant, a defender of Realism in the end, still found “Time & Space” to be mental constructions that we project onto an otherwise real World. Augustine, Anselm, Aquinas & medieval Western Philosophers echoed, neo-Platonists, Plato, & the Eleatic Philosophers (Parmenides, Zeno, Melissus) in questioning the Reality of Time, as we conceive it. While “time” for instance, is a side-issue in Quantum Reality, we will divert to that discussion, in brief, if only because it is so accessible. Cause & Effect, Perception, & similar issues previously introduced here will also see the light of day before we finish with Quantum Reality.

For the moment we end for now with a quick review of the “3 Times” principle found throughout Eastern Philosophy for millennia & echoed again in the above mentioned Eleatic Philosophers, Plato, neo-Platonists, medieval philosophers, Kant, McTaggart, etc. What amounts to a Presentism (& beyond) goes as follows.

“Consilience of Inductions” was a quaint term coined by William Whewell in his 1840 Philosophy of the Inductive Sciences.  's term vera causa  “true cause”  supposedly lies at the center of the very best kinds of scientific theories. Some, the Empiricists held that a true cause is something that we ourselves experience directly. We know for instance that a force [Gravity] is pulling the Moon toward the Earth, because we have had direct experience of the tug of a string  [tension] as we are whirling it around with a weight tied to its end.  But Whewell was a Rationalist who characterized a true cause as something that is adequate to explain the empirical facts. Such a cause has tot be at the center of a scientific explanation, explaining all of the facts & in turn being explained by them. If such a cause can predict & explain new & unexpected facts, then so much the better. Such a fanlike construction, with the Cause at the apex, was a "Consilience of Inductions".  Occam's Razor, that it be as simple as it is possible for a theory to be, suggests that a "true cause" is also marked by being the most economical of explanatory forces, with many parts being reduced to one fundamental mechanism.

Secular Humanists hope for a “Consilience of Inductions” combining Human Cooperation with Environmentalism.  True Non-Duality, underlying all that is positive, is the only Ultimate.

http://sdrv.ms.YPOgkX/
Duplicates have been available on:
jstiga.wordpress.com/
[But from now on, they will be different & still usually daily.]
Posted by jstiga at 9:07 AM