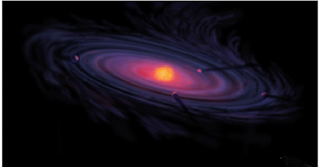 Prior to excerpting the Ramana Maharshi disciple, Master Nome in the text below we continue the series: Fine-Tuned Universe 27, the premise that a small change in several of the dimensionless fundamental physical constants would make the Universe incapable of Life.

Later Astronomical results from the Planck satellite combined with earlier observations from WMAP, ACT, SPT turned up evidence seriously conflicting with the Eternal Inflation model of Guth's "Quantum tunneling out of a false Vacuum State" & those who followed, in favor of less "eternal" models of "a scalar field rolling down a potential energy hill."

Simplest inflaton models were disfavored relative to "plateau-like" potentials. But that conflicts with Einstein field equations & exacerbates both the "initial conditions problem" & the Multi-Verse "unpredictability problem" & adds a new inflationary “unlikeliness problem.”  Thus the experimental data led to one of many previous models, but that model had its own problems.  The net result was serious doubt The Eternal Inflation Model.

Tegmark & Greene provided a [4 & 9 – part, respectively] classification schemes of Multi-Verse models.  A brief summary of this "circus", without much explanation, goes as follows:

Level I in Tegmark's 4  – part
Chaotic Inflation is the existence of an infinite ergodic Universe, which, being infinite, must contain "Hubble" volumes realizing all initial conditions.  Accordingly, an infinite universe will contain an infinite number of Hubble volumes, all having the same physical laws and physical constants. In regard to configurations such as the distribution of matter, almost all will differ from our Hubble volume. However, because there are infinitely many, far beyond the cosmological horizon, there will eventually be Hubble volumes with similar, and even identical, configurations. By this model a Universe identical  to ours should be about 1010,000 meters away from us.  Given infinite Space, there would, in fact, be an infinite number of Hubble volumes identical to ours in the universe. This follows directly from the "Copernican" Cosmological Principle, wherein it is assumed that our Hubble volume is not special or unique.  In Chaotic Inflation theory the Multi-Verse or Space as a whole is stretching and will continue doing so forever, but some regions of space stop stretching and form distinct "bubbles" – like gas pockets in a loaf of rising bread.  Such Bubbles are embryonic Level I Multi-Verses. Different Bubbles may experience different spontaneous symmetry breaking, which results in different properties, such as different physical constants.

Level III
Here is Hugh Everett Quantum Many-Worlds Interpretation (MWI).  Quantum Mechanics observations cannot be predicted absolutely. Instead, there is a range of possible observations, each with a different probability. According to the MWI, each of these possible observations corresponds to a different Universe.  The Level III Everett Multi-Verse does not contain more possibilities in the Hubble volume than a Level I or Level II Multi-Verse. In effect, all the different "worlds" created by "splits" in a Everett Level III Multi-Verse with the same physical constants can be found in some Hubble volume in a Level I Multi-Verse.

In Chaotic Inflation Level I, the multiple Universes reside in 3-D Space.  In Everett Level III they are found on another Quantum branch in infinite-dimensional "Hilbert" Space."

On the other hand, Level II Oscillatory & Fecund Bubble Universes with different physical constants can, in effect, be found as "Worlds" created by Everett Many-Worlds Quantum "splits" at the moment of spontaneous symmetry breaking in a Level III Multi-Verse. (confusing  !  ??)   This redundant Chaotic Inflation, "Multi-Verse  – Quantum Many Worlds" in turn is subsumed, with Feynman's Multiple Histories Quantum Mechanics with under: Level IV.

Level IV
Tegmark's Ultimate Mathematical Universe Hypothesis considers all Universes to be equally real which can be described by different Mathematical structures.

Brian Greene's  9 – part scheme:
1)  The Quilted Multi-Verse works only in an infinite universe. With an infinite amount of Space, every possible event will occur an infinite number of times. However, the speed of light prevents us from being aware of these other identical areas.

2) The Inflationary Multi-Verse is composed of various pockets in which Inflation fields collapse and form new Universes.

3) The Brane Multi-Verse holds  that our entire Universe exists on a membrane (Brane) which floats in a higher dimension or "Bulk". In this Bulk, there are other membranes with their own Universes. These Universes can interact with one another, and when they collide, the violence and energy produced is more than enough to give rise to a Big Bang. The Branes float or drift near each other in the Bulk, and every few Trillion years collide.
This repeated contact gives rise to multiple or "cyclic" Big Bangs. This falls under String Theory & requires extra Space dimensions.

4) The Cyclic Ekpyrotic Multi-Verse has multiple Branes that have collided, causing Big Bangs. The Universes bounce back and pass through Time until they are pulled back together and again collide, destroying the old contents and creating them anew.

5) The Landscape Multi-Verse relies on String Theory's Calabi–Yau Spaces. Quantum Fluctuations drop the Calabi–Yau shapes to a lower energy level, creating a pocket with a set of laws different from that of the surrounding Space.

6) The Quantum Multi-Verse creates a new Universe when a diversion in events occurs, as in the Many-Worlds Interpretation of Quantum Mechanics.

7) The Holographic Multi-Verse is derived from the theory that the surface area of a Space can simulate the volume of the region, in a 1-1 correspondence.

9) The Ultimate Multi-Verse contains every Mathematically possible Universe under different laws of physics.

The “I” knows thought. Thought does not know the “I”. I am the unknown Knower of all knowing. This true Knowledge. None of the attributes of thought are those of the Self. Thought then cannot pertain to the Self, nor define or confine the Self. The Self is free from thought, Thought can never conceive of the Self. The Self is never an object of thought. Thought also has an objective element in it. The Self is ever non-objective. There is no such thing as a non-objective thought, since thought is always known & is always the thought “of” something, be it gross (material) or subtle (mental). The Self is never an object & can never be the known.

The Self is also Consciousness itself. Therefore the Self is ever of the nature that is transcendent of thought. The Self is not known by thought which means the Self is ever undefined by thought & cannot be bound by thought, no matter what the thought is. What is called “the Mind” is only a combination of thought & Consciousness. That combination is an Illusion. That is the Illusion of combining the ever formless with
Consciousness is the Self & cannot truly be combined with thought, for the Self is formless & will not change its nature, is infinite & will not be added to, & is real Existence that cannot be combined with false appearances any more than a rope can be combined with an imagined snake, or the sand combined with the “water” in a mirage. What is casually termed “Mind” is only a collection, or movement of thought. The Mind does no exist as such, & it is not an independent entity. If thought is absent, there is said to be no Mind present.

Thought itself is inert. When the knowing Consciousness is confounded with thought, there arises the notion of a separate knowing entity called the “Mind”. Consciousness is the knowing aspect & is not a thought. No thought is Consciousness itself. Consciousness is the Self, & thus the Self is free from thought & free of the Mind. All that appears is only thought: the World, the Body, the Senses, subtle experience [certain meditative experiences], & of course, thinking itself. All are known in thought only. Thought itself is experienced as if it were all these things [we think it & then assume it really exists or really happened]. All [World, Body, Senses, etc.] are only thought. Thoughts [seem to] join only to other thoughts & affect only other thoughts. Thought appears as ideas, & thought itself appears as the things that concern those ideas. Thought cannot join with the Self & cannot affect the Self. Therefore, thought cannot bind us. Thoughts affect only thoughts [again seeming to since such are unreal]. The preceding thoughts generally determine the succeeding thoughts. The apparent interaction of things upon thought & thoughts upon things is entirely a play of thought, which is merely thoughts affecting thoughts.

Thought itself projects itself into itself. There is no “in” or “out” for such are only mere notions. It is just like the appearance of a Dream-thinker in a Dream. There appears to be Perception of objects & interior thoughts, be they conceptions, associations, emotions, memories, etc. The whole of the Dream, inner & outer, is actually just composed of thought appearing in various ways. Since there are truly no internal & external aspects in a Dream, though in the Dream such appear. So it is with thought, now in the Waking state, such as that in which these words appear. Even the largest thought occupies no Space, & the longest thought endures for no Time. Therefore, all that is conceived is Maya, Illusion. One thinks, envisions, dreams, & such without any connection to physical things. So it is with all thought. When thinking of a large mountain, or dreaming of being in another place, one’s “head” does not enlarge in the 1st case, or one’s Body does not travel to those places or those things being altered in any way. All is thought, inclusive of the large & small, now & then, this & that, you & I, he & she, here & there; Past, Present & Future; all actions, all occurrences; Life & Death; all that is considered the Universe-Individual-God. The Self transcends all this, for the Self is free from thought.


[But from now on, they will be different & still usually daily.]
Posted by jstiga at 10:50 AM