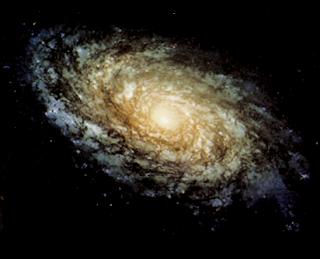 Prior to excerpting the Ramana Maharshi disciple, Master Nome in the text below we continue the series: Fine-Tuned Universe 25, the premise that a small change in several of the dimensionless fundamental physical constants would make the Universe incapable of Life.

How did life begin ? [confessions of the Atheist]

Most scientists would answer, “By accident.” But what an absolutely unlikely accident it must have been !  The Earth on which life first appeared – prebiotic Earth – was most inhospitable: a violent place, wracked by storms and volcanoes, wrenched by the pull of a moon that was much closer than the one we know now, still battered by cosmic impacts. On its surface and in its oceans were myriads of organic compounds, some formed in processes occurring on earth, some imported by infalls from space. Out of this universe of tumult and molecules, somehow a small subset of chemical processes emerged and accidentally replicated, thus stumbling toward what became the first cells. How could such a chaotic mixture of molecules have generated cells?

Order usually decays toward disorder: Why do the tracks that led to life point in the opposite direction? The origin of life is one of the biggest of the big questions about the nature of existence. Origin tends to occur frequently in these big questions: the origin of the universe, the origin of matter, the origin of life, the origin of sentience. e, scientists and non-scientists alike, have troubles with such “origins” – we were not there watching when the first events happened, we can never replicate them, and, when those first events happened, there was, in fact, no “we.” I believe that one day we will be able to describe life in physical terms – that is, we will rationalize life satisfactorily in molecular detail based on accepted scientific law and scientific theory using the scientific method. But we certainly do not know yet how to do it.

For understanding how organized living cells emerged from disorganized mixtures of molecules, how disorder can spontaneously become order, how to understand systems comprising many interacting parts:

We must wonder: what is “life” ? What are the characteristics of a cell, the simplest embodiment of life, that might allow us to trace back to its origins? When do molecules, and of processes that convert these molecules into one another, cross a line separating “not-alive” from “alive”? What is the tool – the “scientific method” – that science will use to try to address this problem?

The Scientific Method works most rigorously when it identifies observations that are incompatible with current hypotheses. Faced with a new observation, scientists
list all hypotheses that might explain it and then discard those that are incompatible
with accepted physical law. Hypotheses that are not discarded as incompatible
remain possibilities. If only one remains, it is promoted to Theory. If disproving all
hypotheses but one is not possible, we may retreat to demonstrating compatibility
with theory, recognizing that compatibility is weaker than proof. In science, we
use the phrases “I think . . .” and “I believe . . .” as synonyms, both implying “. . .
based on known physical law.” In other words, “This theory accommodates all the
observations that we currently know.”

So, what is Life?:
1. Life is compartmentalized. cells have a continuous, closed membrane separates “inside” from “outside.”
2. Life is dissipative, or out-of-equilibrium, requires a flow of energy, NOT equilibrium.
3. Life is self-replicating, produced by the division of a parent cell, will divide  &  produce daughter cells.
4. Life is adaptive. The cell can adapt its internal environment so that it functions even when the outside environment changes; in some circumstances, it can even modify the outside environment to make its inside more comfortable.
5. Life occurs in water. All life, so far as we know, involves molecules and salts dissolved or organized in a medium that is mostly water. We do not know whether water is essential to all life or just to life as we know it. But, at this time, we know no exceptions: life occurs in water.

Life is a spatially distinct, highly organized network of chemical reactions that occur in water and is characterized by a set of remarkable properties that enable it to replicate itself and to adapt to changes in its environment.

Life is very remarkable: Catalysis –  Enzymes (valves in a cell chemical plant) one kind of molecule becomes another in a way analogous to valve controls the rate at which fluid flows through a pipe & catalysts – the valves – are themselves controlled by the molecules they produce: the products of  one reaction can control the rate at which another reaction takes place.

Components of the network to form a single, coherent, interconnected, albeit very complicated, entity rather than an inchoate collection of independent processes, intricate “conversations” complex interactions modulated by signals fr outside  & internal “clock”  =  “cell cycle” –oscillates spontaneously, defines the sequence of stages through which the cell progresses as it replicates. Many molecules in the cell also have multiple roles: intermediates in one or many synthetic pathways, controllers of the activity of catalysts, signals for generating the catalysts and other molecules, sources of energy, and components of cell structure.

We do not understand how it all fits together & stability of Life & of the networks that compose it. Other very complicated networks (global climate, air-traffic-control systems, stock market) puzzlingly unstable  &  idiosyncratic. But Life is stable – it is able to withstand, or adapt to, remarkably severe external jolts and shocks; and its stability is even more puzzling than the instability of the climate. We have a hard enough time understanding even simple sets of coupled chemical reactions. And we have, at this time, no idea how to understand (and certainly not how to construct) the network of reactions that make up the simplest cell.

The World is constituted solely of Sense Perceptions, usually made from a supposed
Bodily location [dreams have dream-bodies but out-of-the-body OOBE experiences, etc.
are exceptions]. There is no World apart from these Perceptions. So the World is not
“external”. The “external” is merely a conceptual interpretation of the Sensations. The
Senses are known only by & in Consciousness. So what is thought of as “external” is
entirely in Consciousness, which is free from the Senses. The “external World” is a mere
Notion in Consciousness. Within that Notion there appears the whole “external” World.
That is one Notion fragmented into the imagining of endless objects that assumed to
exist. That one Notion depends on the “I am the Body” belief. The World is a mere
notion, an illusory appearance in one’s own Mind. Therefore, the Notion is called Maya,
Illusion. But Illusion is that which is not.

Since the World is unreal, it can produce no Bondage. Being unreal, the World does not
really come to be. It is for this reason that Maya is said to be beginningless [not eternal –
like it always was – but rather that it never started, never happened]. Reality does not
bring forth the unreal. Being Non-Dual, Reality does not bring forth any other thing that
is real either. Ever-existent Being, itself Unborn, never creates at all. Nor it the unreal
ever “born” [beginningless – but this time because it never comes to be], for the unreal
does not exist. Being unreal, the World does not disappear for you (as individual) either,
anymore than the Dream World disappears for the Dream character when one (like the
real Self) awakens from both (Dream World & Dream character).

The World appears in Consciousness alone. The World is the known that is known by the
knower (apparent individual). The World is also known “in” the knower (the real
knower, the Self). The World has no existence apart from the (real) knower which is pure
Consciousness. The World appears in Consciousness by the power of Consciousness.
The World is composed of Consciousness, & is known or experienced by Consciousness.
All of it is just Consciousness. The World has not the least degree of any other existence.
One Existence-Consciousness exists everywhere always. The one Self experiences itself
everywhere always. The Self itself is in that case just “thought of” as the World, Space,
Time, matter, motion & events, moments, eons, things, & people – the animate & the
inanimate, moving & still, large & small, living & dead, far & near, atoms & galaxies,
root & flower, cause & effect, & all else. The one Self is all. The one Self appears as all
this Universe. The Universe appears, in the Self. The Self being Formless & Infinite,
does not appear in the Universe. The Self rather appears “as” the Universe, but that Self
really undergoes no modifications. The Self always abides as the perfectly full Void of
Being. If the World appears, the World & its knower (apparent individual) are only the
Self. If there is no appearance of a World, there remains only the Self. In the Knowledge
of the unalterable, ever-same Reality, the Self alone is. Thus, in Reality, there is no
question of a World ever being created or ever appearing. For whom would a World
appear, since there is no 2nd “self” but only the 1 Self, forever.