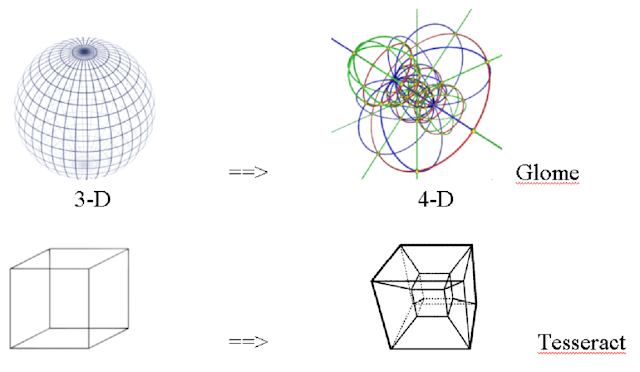 Prior to excerpting the Ramana Maharshi disciple, Master Nome in the text below we continue the series: Fine-Tuned Universe 20, the premise that a small change in several of the dimensionless fundamental physical constants would make the Universe incapable of Life.

Put a hula-hoop onto a large table and within the hoop place one of those ultra-disposable cellophane gloves, perfectly flat, the same on both sides. With all this on the table, what you happen to see is a Right-handed glove, as if in a 2-D World of the table-top, and specifically “locked-in” (in a 2-D sense) within the hula-hoop “chamber” (in a 2-D sense). Without a “door” (opening) in this hula-hoop chamber, the Right-handed glove cannot be taken outside. But if the glove can be brought into the 3rd Dimension of Space, “escape is accomplished. Just lift it up and put it down again outside the hula-hoop circle. Similarly, if you put a Right-handed glove back down on the table inverted from how it had been, you would have changed it into a Left-handed glove. Symmetry-change, barriers, and other challenges can be conquered with access to a higher Spatial Dimension.

"If it is possible that there could be regions with other Dimensions, it is very likely that a God had somewhere brought them into being. Such higher Spaces would not belong to our World, but for separate Worlds."                                Immanuel Kant
The very size of Space also serves to protect us (and alien civilizations ?) from potentially predatory alien civilizations (every groupd gets its own sandbox. The Light-Speed-Limit keeps us 3 seconds from the Real Time of the Sun. The lag becomes 4 years for the next Sun (star) down the road, Alpha Centauri, but who travels near the Speed of Light? An then the Time buffer extends quickly to thousands, millions, and billions of years. In some kind of currency, it has to cost a lot for strangers to come and bother us for no good reason.

Curiously, Kant foreshadowed a Multi-Verse, one which kept God in the picture instead of, as today, supposedly automatically “proving God need not or even does not exist. The Idealist philosopher Immanuel Kant in mid–19th century also reasoned out that the inverse-square dependence of Newton’s Gravity on Spatial distance verified that Space could not be 4-D. Expanding spheres of distance describe the attenuation of Gravity (& Electrical force), necessarily by an inverse-square characteristic of the Surface Area of the 3-D sphere. A 4-D Space would dictate an inverse-cube relationship characteristic of a 4-D Hyper-Sphere (a Glome).
The generalization of the Philosopher’s insight is that the Structure of Space dictates Physical Law in these cases, rather than vice versa, an early Anthropic insight at that. Another Victorian dance with Dimensions was of course the elsewhere-mentioned Flatland by Edwin Abbott, ranging all the way down to 0-D which is somewhat comically used to parody UQND, represented by 0-D. Sometimes folks have joked about something they dare not promote (in that day and time), just to get in mention of it without openly committing themselves, and that case may consciously (or sub-consciously) be a bit of that as well.

"The Universe is real but you can’t see it, You have to imagine it."        Alexander Calder

The referenced 20th century sculptor makes a good point (especially after we take out the unprovable assumption that the Universe is “real” anyway) which is that Sense-Impression of a universe is Imagination. We cannot really “see” or perceive it directly, even up close. Out at great distance, we must depend on the testimony of Science and media anyway, even if the Objective were to be provably real.

Throughout these scenarios, one Dimensionless Ratio of note is the Cosmological Constant mentioned above as controlling the Expansion of the Universe.

Being alone knows itself, the "I"-less "I" realized as "I," forever undefined, the only
Existence, the only Knowledge, the only Knower. Thus is Brahman, Absolute Reality,
always present, unmarred Perfection, the unformed Void, attributeless Being, ever itself
just as it is. The only Identity, the only Reality, Being alone knows itself .
Without any other is Absolute Being, formless & Non-Dual, the only Existence. Two that
are Formless cannot be. Undivided, homogeneous, alone is Being. nothing outside it &
no outside; nothing within it; alone is Being, pure Existence. Nothing comes before
eternal Being; nothing comes after eternal Being. Without any other is Absolute Being,
pure Existence.

The Truth of Being is solely Reality. Not from illusory things falsely experienced does
the sense of Reality in every experience derive, but only from the Self, the only Source,
the Real. Real Being depends not on anything else to be. Uncaused itself, the Absolute
Self doesn’t cause anything else. Infinite, there is nothing beyond produced by it. Mistake
not perception or conception for Existence itself. Reality is solely the Truth of Being.

http://sdrv.ms.YPOgkX/
Duplicates have been available on:
jstiga.wordpress.com/
[But from now on, they will be different & still usually daily.]
Posted by jstiga at 2:46 PM