Essay outside of the NMT (No-Me Teaching) series 12 b 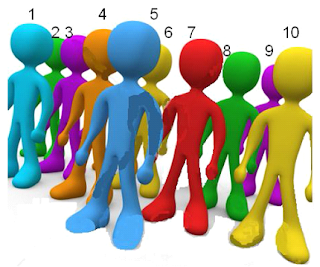 Ramana Maharshi would tell the Vedanta parable of the 10th:

Hiking the hills & needing to cross a raging snow-fed river in Spring, 10 traveling Fools made of themselves a human chain to safeguard their passage. Given the slippery stones underfoot & unexpected high water level & onrushing force, there was natural concern that they all had made it the other shore. The first one to think of it began a head count, pointing at each, calling out as he wagged his finger: “1, 2, 3, 4, 5, 6, 7, 8, 9.” Suddenly upset the poor Fool cried out: “That’s it, only 9. Omigosh! Who did we lose?” 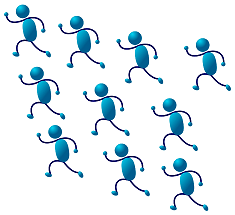 In horrified disbelief, another Fool repeated the head count: “1, 2, 3, 4, 5, 6, 7, 8, 9.” & so did another, & another, until everyone on shore gave it a try, all confirming the original tragic announcement. The confusing part for them, of course, was that no one could figure out who was the missing one. Easy for us, we aren’t shivering & wet with freezing river water, exhausted & frightened. But then again, it was kind of silly. Given that they all followed the misguided example of the first, pointing only at other heads as they counted. If only one of them had kept track & counted the number of counts called, they would have be reassured when the full 10 counts were listed.

Their luck soon changed when just then an eminent spiritual master & teacher, a Guru much revered in the region, came walking down their shore, having seen the pantomime of their plight from the distance as he approached, not needing to be within earshot get the picture. But upon listening patiently & trying in vain to explain the proper Arithmetic to them, he decided to quickly demonstrate after kindly letting them off the hook, saying that many people experience confusion like this, as when told that such & such will occur in 10 days. some will ask: “Does that 10 count today, or do we start counting tomorrow as 1?” “But practical experience is best, so here we go” he said, & continuing: “when I tap your head with my staff, you the first one call out 1 & next 2 & so on until I’ve tapped the last one.”

And so he did, & they called out, a bit nervous as they got to 9. But sure enough, they distinctly heard one last hollow bonk of the staff on a head & the call 10. There he was smiling & laughing with relief, the one the Guru had arranged to be last, the same first one the Guru saw start the counting, recognizing him now as had seen him from a distance. Smiling with kindness the Guru concluded for him: “Yes, Thou Art the 10th.”

In “Thou Art the 10th!” the actual number 10 has no particular significance there other than in helping recall of the Parable. What matters is that each essentially makes the same mistake when failing to count himself, or more to the point, take himself into account. The remedy is to Inquire “who am I” in order to know oneself. Self-Knowledge, the direct result of Self-Inquiry, is also known as Self-Realization, Enlightenment, Liberation, & in the original languages: Moksha, Nirvana, Mukti, & so on. That is the ineffable Reality itself, ever inexplicable & beyond words. In that same Dream, the Maharshi continued to respond to a succession of questions about Self-Knowledge that were winding down-level to issues of their being two ways one forgets to take into account oneself. Both kinds of self-amnesia are modeled in slightly different ways by analogy based on the Parable about the 10th.

Robert Heinlein's hero in Stranger in a Strange Land drew from the same scriptures, without direct reference, when his planet-colony "visitor" was asked about the that colony's understanding of "God". Confused at first, that character, Michael Valentine, hesitated, pondered, & then realized what was being asked. Shaking his head in denial of the basic premise of the question, one about some separate super-being, the extra-terrestrial visitor responded: "Thou art God!" (Of course the "thou art" would not have been used unless the Mahavakya was being referenced. Thou Art …  –  Tat Tvam Asi, That Thou Art, is the one Mahavakya out of the tradition of 4 that is typically rendered in the archaic English thou and art to lend a “biblical” significance to the 3 short words. With far less understanding of the very deepest meaning, we can note sci-fi written at the close of the 1950’s and published in the next decade by Robert Heinlein, Stranger in a Strange Land, in which another version of that Mahavakya appears. That story’s Alien is seeking to decipher the earthling word “God” but is met with a confusing array of poorly conceived answers, as would still be the case. Only very slightly parallel to our own Alien, the old sci-fi version finally gets the drift of their stammering and he is stunned that they don’t already know. He utters: “Thou Art God”  – a nice honoring or the Mahavakya for the American 1950’s even if Heinlein exhibits no further understanding of the Proclamation, in terms of Self-Knowledge, the primary concern. As for the partial equivalence of the word “God” compared to the assumed Brahman in the Mahavakya, it is worth noting that Meister Eckhart came closer with the term Gottheit “Godhead”. Written in the late 1950's & then published in '61, this was pretty "far out" for an American sci–fi author.

http://sdrv.ms.YPOgkX/
Duplicates have been available on:
jstiga.wordpress.com/
[But from now on, they will be different & still usually daily.]
Posted by jstiga at 8:44 PM